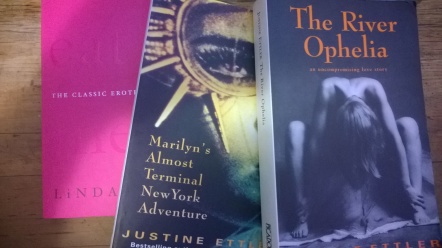 The work of a number of young authors published for the first time in the 1990s, commencing with Andrew McGahan (Praise, 1992) and including Justine Ettler (The River Ophelia, 1995), Linda Jaivin (Eat Me, 1995) and Christos Tsiolkas (Loaded, 1995), was given the label Australian Grunge.

At the Melbourne Writers Festival in 1998, the Aust.Lit. discusssion group including McGahan, Fiona McGregor, Jaivin and Tsiolkas “all remonstrated at how hateful they found the label and how they did not wish to be associated with it.” But given that the ‘Grunge’ label has stuck, let me define it as writing about the transition from adolescence to adulthood, low rent inner suburban share houses, sex, booze, drugs and rock & roll; the name itself being originally applied to a type of music following on from ‘Punk’ in the 1980s, and the writing having pedigreed antecedents in works like George Orwell’s Down and Out in Paris and London (1933), William Burroughs’ The Naked Lunch (1964), Helen Garner’s Monkey Grip (1977) and Kathy Acker’s whole body of work (of which I have read only Pussy, King of the Pirates (1996)).

Two current women authors I posted on earlier this year probably owe some elements of their style to their Grunge predecessors: Ellen van Neerven and Jane Rawson, and maybe also Nikki Gemmell (whose first novel came out in 1997).

In passing, I’m not a big fan of Jaivin, and while her second and third novels, Rock & Roll Babes from Outer Space (1996) and Miles Walker You’re Dead (1997) might be characterised as grunge (in a try-hard sort of way), Eat Me is just ordinary, middle class, women’s erotica. Four thirty-something Sydney women each seek sexual satisfaction in a novel of ‘women’s erotic fiction’ being written by one of them which, while both sexy and fun, the author uses as a vehicle to discuss seriously issues of third-wave feminism and the problematic boundary between erotic fiction and pornography. The women maintain their independence with a commitment phobia as great as that of the young men they sleep with, and while they are at least recognizable as the heirs of Deb and Guinea of Come in Spinner (my review here) in the same city half a century earlier, their incomes, their careers and above all their freedom from the constant spectre of backyard abortions are way beyond the dreams of 1940’s women, let alone of course the women of 50 years before that, in the novels of  Tasma, Praed and Cambridge, say, where ordinary 1990s’ lifestyles, incomes and freedom of movement, were possible only to the daughters and wives of the seriously wealthy.

Australian Grunge was contemporaneous with and to some extent linked with third-wave feminism and I think it is fair to say that if second-wave feminism was only equivocally successful at freeing women from men’s expectations and meeting women’s objectives for ‘equality’, then equally problematic is that aspect of third wave feminism, woman-as-sexual predator, which is celebrated by Jaivin, but whose downside is chronicled here by Ettler.

The River Ophelia, followed by Marilyn’s Almost Terminal New York Adventure (1996) were Justine Ettler’s first two novels, written while she was undertaking her PhD (in American Lit). A third novel was expected but hasn’t yet arrived and it appears Ettler is now an academic and journalist (with SMH).

One reviewer called The River Ophelia “a postmodern homage to de Sade, Shakespeare and inner city Sydney”. Sydney, in fact, isn’t named in the novel, though I have no doubt that is where it is situated. Ettler speaks only of an inner suburban area called the Peninsula, which I am unable to place at all, though the novel ‘feels’ as though it is located in the region Kings Cross to Bondi.

This is a novel of great pain, and an enormous amount of not always satisfactory sex. As one of the characters says about her growing up:

The references to de Sade and Shakespeare are, initially at least, in the names: Justine and her boyfriend Sade, their friends Simone, Marcelle, Hamlet and Ophelia. If Sade is not a sadist then Justine is quite clearly a masochist. Slowly over the course of the novel we learn of the childhood pain (not abuse, but neglect through lies) that leads her to harm herself, to throw herself at Sade although he is quite clearly having sex with others, sometimes even while she is present.

The key quote is:

The plot is straightforward, and largely irrelevant. Justine is a student preparing a thesis, Sade is a writer, currently with Playboy; Justine is doing therapy with Juliette, who turns out to be a murderer; Justine sleeps with Sade, spends all her grant money on taxis, alcohol and drugs, spies on Sade’s flat whenever he’s not sleeping with her, goes to nightclubs with Simone, where Simone ends up having sex with Sade, loses her flat and moves in with Hamlet and Ophelia; Ophelia leaves and Justine competes with Simone to sleep with Hamlet; Justine’s father is dying of cancer but Justine keeps putting off going home to see him; Sade gets offered a lectureship in New York but Justine won’t go with him.

Justine sums it up:

A year ago, I nominated The River Ophelia on my shortlist (of 10) for the Great Australian Novel. The reason is the intensity of the writing. How Justine lives, what she goes through, is entirely outside my experience. I went up to uni in 1969, and for all the talk of hippies and free love, getting laid was infrequent, desperate and fraught; a year later I was up the bush driving trucks and by the time I was 30 I was married with children. The life she talks of, of clubbing, drugs and sex, is both alien and unappealing, and yet it generates the most amazing writing.

my review of Kathy Acker, In memoriam to identity (here), discussing inter alia the connections from Burroughs to Acker to Ettler.

added 18 Nov 2017. Ettler withdrew both The River Ophelia and Marilyn from the market after becoming unhappy with the (false) connections being made between her and her protagonists. What she says about it, and her embrace of post-modernism, in the interview is fascinating.

The expected third novel had to be shelved due to problems with defamation, but The River Ophelia has now been re-released. Justine writes: “Just to let you know that TRO went to the top 5% of sales on Amazon in its first week.”