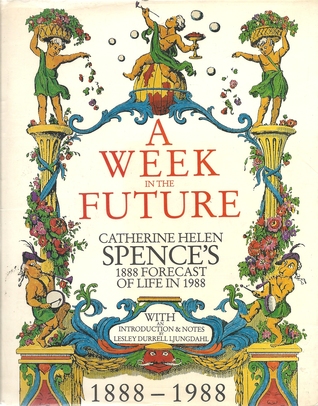 “Catherine Helen Spence (1825-1910) was hailed at the end of her long life as ‘The Grand Old Woman of Australia’, known for her achievements as a social reformer, essayist, journalist, preacher and advocate for electoral reform. Her philanthropic work has been justly praised, while her literary achievement is still overlooked, although her eight novels reflect a most interesting exploration of the nature of fiction.” (Prologue)

A Week in the Future, a novella of about 100 pp, was originally published as a serial in The Centennial Magazine: An Australian Monthly from Dec. 1888 to Jul. 1889 – presumably as part of the celebration of the first 100 years of white settlement in NSW – and was reissued as a handsome (21cm x 27 cm) hardback, with a Prologue by Lesley Durrell Ljungdahl and illustrations from (London) Punch, the Bulletin and The Centennial Magazine, in time for its own centenary and NSW’s bi-centenary. I can’t tell you anything about Ljungdahl except that he/she completed a PhD thesis on Spence at UNSW in 1992.

Spence uses A Week in the Future to advance the ideas of British feminist and reformer Jane Hume Clapperton (1832-1914) who wrote Scientific Meliorism and the Evolution of Happiness (1885). According to Ljungdahl, Spence’s borrowings from Clapperton “are so flagrant that sometimes they amount to plagiarism.” In case you’re wondering, scientific meliorism “is an essentially optimistic faith in society’s potential capacity for improvement” and is opposed to socialism in that socialism advocates forced change whereas scientific meliorism advocates change adopted gradually and voluntarily.

The protagonist, Emily Bethel, is an unmarried, middle class woman in her sixties living in Adelaide, which is to say she is standing in for the author, but is frail (Spence lived to be 85) and with the assistance of her doctor exchanges the two years of failing health left to her for one week of good health, one hundred years in the future, in the city of her choice, London.

So how does Spence in 1888 imagine London in 1988, what are her predictions? She sets them out in seven chapters, one subject area for each day of the week.

Monday, Associated Homes: Spence describes a society built around cooperatives both for employment and housing, following the ideas of socialist mill owner Robert Owen (1771-1858). Emily runs into a woman of her own age, Mrs Carmichael, who turns out to be the granddaughter of the niece she left behind in Adelaide. Mrs Carmichael lives in Robert Owen House, which like the buildings around it, which have replaced traditional row housing, has accommodation for 20 families and substantial gardens for fruit and vegetables. Dining is communal at set times, and individual sitting rooms have been replaced by activity rooms. This is a middle class vision and the 20 families employ a number of servants, but of course the servants lead middle class lives elsewhere. Women, with no domestic work, are “set free to pursue bread-winning avocations”. Population growth is held to zero by restricting families to a maximum 3 children. The most shocking prediction is that “idiot children” are destroyed at birth.

Tuesday, Co-operative Production & Distribution: This chapter starts out on newspapers, which are much thinner than before as universal peace means there is less news, and co-op stores obviate any need for display advertisements:

“Where are Holloway’s Pills, Eno’s Fruit Salt, Pears’ Soap, Hop Bitters, and such like?”

“Not now worth advertising apparently. Sales are made to the stores, which are not induced to buy by plausible advertisements.”

It seems there was a period early in the century when armies were disbanded and soldiers turned to farming and manufacturing. The problem of excess labour was solved by emigration and the turning of unproductive land to agriculture, so that by 1988 the UK and Australia have similar populations – around 30 million. Although there continues to be some trade, each country largely produces what it needs for itself and uses tariffs and immigration controls to prevent “coolies and Chinese coming to destroy all we have struggled for!” Though the populations of India and China too have been stabilized by reducing family size.

Spence does predict decimal currency, the Russian Revolution, the end of the British Empire and the independence of India.

Emily goes out of London on a nationalized (steam) train – unlike Australia, the railways in England in the 1880s were privately owned – and visits a farming collective. Farming is still labour intensive, though more efficient. All workers work 6 hour days, horses are used sparingly and much of the heavy work is done by stationary steam engines.

She visits a cotton factory, staffed mostly by women, who are happy, share in the profits and write music and poetry in their 18 hours per day of leisure; and a ‘great Emporium’ where everything is available, and at reasonable prices, except birthday and Christmas cards.

On returning that evening to Robert Owen House she found that “Wagner’s was not really the music of the future, for no one seemed to have heard of him. Handel, Mozart, Beethoven, and Mendelssohn were still known and loved.”

Wednesday, Childhood & Education: Children are home schooled till 8 years – in the nursery in the case of associated homes – then attend state schools until 14. There are no exams, no competition, no ‘breaking of wills’. “The prizes at school, like the prizes of life, used to be won from defeated and mortified competitors.” After 14, children go to work, but many make use of their ‘abundant leisure’ to continue their high school educations at Continuation schools, which are taught by volunteers. At London University Emily sees “mixed classes of youths and maidens, or what would have been maidens in our time” (what is she suggesting!)

Thursday, Marriage & the Relations of the Sexes: Emily attends the marriage of her great-grandniece, a religious ceremony conducted by a clergywoman. The religions have persevered though “even the Catholic Church has been made to feel that the interests of humanity as interpreted by common sense and experience are paramount” which means apparently they accede to the general custom of early, childless marriages and easy divorce. Later marriages, with children, involve longer, although still no-fault, divorces.

Friday, Government & Laws: When Emily ventures into the city she finds that London has been greatly diminished by the near-cessation of international trade. Many of the dockland warehouses have been converted into co-operative housing; parks and gardens are everywhere; the Underground has fallen into disuse – “there was plenty of space above to run all the necessary trains. Omnibuses were no more, the tramcars were no longer drawn by horses.” The population of London (and of Paris and New York) has been brought down to about a million.

As for government, there is a president, a senate with representatives for each ‘province’ in England (10), Ireland (4), Scotland (4) and Wales (2), and the House of Commons. Ireland has been ‘pacified’ but Spence does not say how, nor much about the revolution which brought about the removal of the royal family and the House of Lords.

In the hundred years that had elapsed since I had known the world, first had come a cataclysm sweeping away the old foundations and much that had been reared upon them, and from these had gradually emerged a new society… No longer were the prizes of life held by the few through inheritance, or snatched by energy, by business talent, by unscrupulous rapacity, or by subtle craft.

Saturday, Literature & Art; Music; the Drama & Sport: Of course, being British, the Revolution had been polite. In the National Gallery Emily sees in the paintings of that period “there was not such savagery in the expression of the surging crowds who wrought this revolution as we were used to see in the pictures of the French Revolutionary period.” Art, she discovers in this utopia, is amateur and naturalistic. Novels, and the plots of plays and operas, suffer from the lack of drama in everyday lives. Emily attends an ‘Italian’ opera, and professes herself well pleased. Sport, it appears, is played by everyone, on the ‘village green’.

Sunday, Religion & Morality: The leaders of the revolution were Socialists, Communists, Nihilists – secularists all – but were surprised to find that “large numbers of the new generation, rising up, clung to the faith in the unseen and the unknown,” so that churches of various denominations continue, though without their previous wealth – and with no mention of Jews or Muslims. The chapter (and the book) ends with a prayer.

Spence is not Jules Verne or HG Wells and makes no attempt at science fiction, although she has great faith in advances in medicine and birth control. Her aim is to discuss a better way of living, which I think she does successfully. A Week in the Future, though densely argued is quite readable, and I don’t think she should be judged for failing to predict air travel, automobiles, rock’n’roll or short skirts.

18 thoughts on “A Week in the Future, Catherine Helen Spence”