What fiction by early Australian women writers is still in print? None from the C19th probably, and very little up to the 1960s. Publishers continue to put out (a limited selection of) men’s writing from the C19th – Henry Kingsley, The Recollections of Geoffry Hamlyn (1859), Rolf Boldrewood, Robbery Under Arms (1882) and Marcus Clarke, For the Term of his Natural Life (1874)-  but what of the women -Tasma, Ada Cambridge, Catherine Martin, Rosa Praed, Mary Gaunt, Catherine Helen Spence? They were often more popular than the men but dismissed by the literary establishment as ‘romance writers’.

The Australian Women Writers Challenge have put up an excellent site (here) where they are listing all books by women, available online, sorted by decade, up to the 1930s. I thought I might complement this by beginning a list of C19th books which have been republished in the last 50 or so years, since we began to get ‘modern’ paperbacks, and which you might therefore find in second-hand bookshops.

Dale Spender published some women at Pandora in 1987, Australian Women Writers: The Literary Heritage series; and at Penguin in 1988, Penguin Australian Women’s Library. Seal Australian Fiction publish books out of copyright, but Spence’s Clara Morrison, “published with the assistance of a grant from the Commonwealth Literary Fund” is the only one I’ve found for this list. Then there are Imprint Classics which has republished some  books from the first half of the C20th, Virago which republished Miles Franklin’s Everyday Folk and Dawn (1909), and of course, Text Classics (which however, appears to have no C19th women).

So, here is what I’ve found so far for the first wave of Australian women writers (prior to the Bulletin and ‘bush realism’):

13 books from the C19th plus 3 from the C20th, pathetic isn’t it? Let’s hope we can come up with some more before ‘paper’ publishing dies completely.

I haven’t done too badly, I have eight of these, plus I read one Ada Cambridge when most of these were republished and acquired by my local library in 1988-89. And I’ve been trying to force myself to read/review Praed’s Lady Bridget on my tablet for a year now – it’s an important book both for women’s writing and for its representation of interactions with Aboriginals. I guess Kindle is the way of the future, but how do you feel about the means of reading being owned by one commercial entity?

Show-off Tues (to borrow a heading) 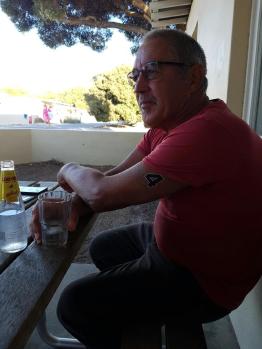 Enjoying a g&t on Rottnest Island after last weekend’s Rottnest Channel Swim. The stewards pulled me up at 17km mark – 3km to go – when they determined I wouldn’t finish inside the regulation 10 1/2 hours. Time to retire! More on facebook – it was a lovely day for a swim.

26 Dec 2017. I’m starting to think about an AWW Gen 2 (and suffragists) page so shall put links here from time to time so they are not lost.