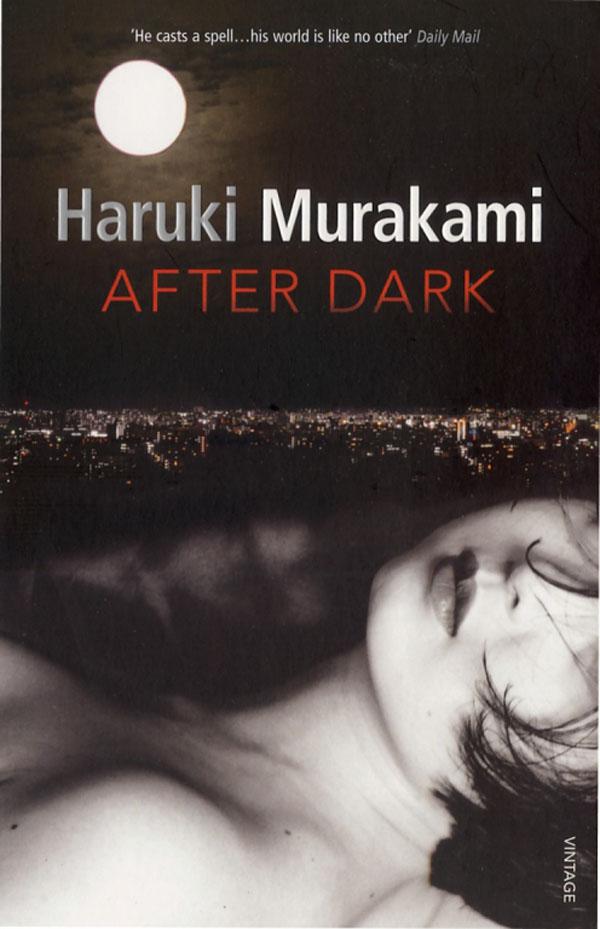 Haruki Murakami (1949 – ) is Japan’s “best-known novelist abroad”. I came to him late, borrowing an audio book version of 1Q84 from my local library one or two years ago. The opportunity to read this one came up when I saw our house in the Rue de la Tombe Issoire had a shelf of English language Murakami’s, selected this one as the shortest, and knocked it off in one night (that is, I read it, I didn’t take it with me). But I’ll have to make room in my posting schedule to fit it in.

After Dark (2004) is both short – 200pp – and unlike 1Q84, relatively straightforward, but still with elements that occupy the space between SF and magic realism. A young woman is sitting in a cafe, a Dennys, late at night, reading.

She is probably college freshman age, though an air of high school still clings to her. Hair black, short, and straight. Little make-up, no jewellery. Small, slender face. Black-rimmed glasses. Every now and then, an earnest wrinkle forms between her brows.

She’s pretty, but we learn that she doesn’t think so herself. A lanky, young man with long, tangled hair comes in and, after a minute, joins her at her table. It appears that he has met her before,  on a sort of date with her spectacularly good looking older sister. The name of the young woman is Mari, and her sister is Eri. It is only later that we discover the young man’s name, Takahashi.

Takahashi leaves. He’s a trombonist in a band having an all-night practice session in a near-by warehouse. Later, a big, athletic woman, Kaoru, comes in, a former wrestler now managing a love hotel. A Chinese prostitute has been beaten and abandoned. Takahashi who sometimes helps out at the love hotel, has told Kaoru that Mari speaks Chinese. Mari goes off with Kaoru.

The room is dark, but our eyes gradually adjust to the darkness. A woman lies in bed asleep. A young, beautiful woman: Mari’s sister, Eri. Eri Asai. We know this without having been told so by anyone… We allow ourselves to become a single point of view, and we observe her for a time.

There is a television in the bedroom. The screen shows a seated man staring out into the room. Sometimes the screen flickers. Later in the book Eri’s bed is empty, the bedding undisturbed, but through the screen we see that, somewhere, she sleeps on. When she eventually wakes she seems unable to make her way back.

With Mari translating, Kaoru and her workmates patch up the Chinese woman. Mari feels they might have been friends if circumstances weren’t dragging them in radically different directions. The Chinese woman is picked up by her minder on a motorbike. Throughout the night the bike cruises past Mari and Takahashi. They don’t notice.

Mari talks to the women at the love hotel, to Takahashi who has cut short his rehearsal. Mari’s parents have concentrated all their attention on Eri and her modelling career, Mari is the ‘plain’, sporty one. She can’t go home, something is wrong with her sister, she, Eri won’t wake up. Takahashi has decided to give up music and concentrate on his studies to become a lawyer. We find that Eri has confided in Takahashi, who was in her year at school, but not in her circle. The night passes.

Allowing ourselves to become pure point of view, we hang in midair over the city. What we see now is a gigantic metropolis waking up. Commuter trains of many colours move in all directions, transporting people from place to place. Each of those under transport is a human being with a different face and mind, and at the same time each is a nameless part of the collective entity.

Mari finds a way to begin bridging the gap to Eri.  After Dark is a good read, and  just sufficiently weird to keep you intrigued.

In the rue de la Tombe Issoire we are sitting up late, watching new episodes of Big Bang Theory on British TV. Geology daughter says “if it’s written by a man, with that cover” then she doesn’t want to read it. She’s right, Murakami is telling us women’s stories, of being in the beauty industry, of being a sister, so now I am unsure. You will have to decide for yourself.

11 thoughts on “After Dark, Haruki Murakami”