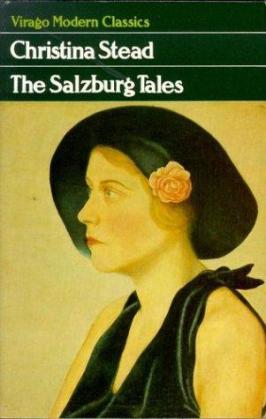 The Salzburg Tales (1934) is a collection of often fantastical tales told to each other by a group of visitors to Salzburg, there for “the August Festival, the great event of Salzburg men”, and with spare time during the seven days of the Festival to wander in the woods and pastures outside the town. We know that Stead is a wonderful writer, but the virtuosity of these tales with all their different styles and settings is amazing. And Stead’s daring in making her first published work a take on The Canterbury Tales, one of English literature’s earliest and best-known works, is breathtaking.

The story behind the book is that for some years Stead had been working on, and her partner Bill Blake had been attempting to find a publisher for, Seven Poor Men of Sydney. Eventually Blake came up with Peter Davies – apparently the adopted son of JM Barrie and the model for Peter Pan – who gave her a contract with the condition that she write something else as well, which she did, taking about a year.

When she presented this second work to Peter Davis he said that his company did not like to begin with a book of short stories, to which she replied ‘too bad’. He did however publish The Salzburg Tales first and it was a succès d’estime. (Williams)

We know, in later years at least, that Stead always had two or three manuscripts on the go, and my guess is that that was the case then too. She had already begun on ‘Lovers in Paris’ that was to become her third novel, The Beauties and Furies, and I’m guessing that she had also already begun the stories that make up The Salzburg Tales, enough at least to make an informed pitch to the publisher.*

The Canterbury Tales begins with a Prologue which includes portraits of the travellers, and then goes on to the travellers’ tales. The Prologue begins: “When April with his showers sweet with fruit/The drought of March has pierced unto the root/And bathed each vein with liquor that has power/To generate therein and sire the flower …”.

The Salzburg Tales begins also with a Prologue, with the opening lines:

Salzburg, old princely and archiepiscopal city, and its fortress Hohen-Salzburg, lie among the mountains of the Tyrol, in Salzburg Province, in Austria. The river Salzach, swift and yellow from the glaciers and streaming mountain valleys, flows between baroque pleasure-castles standing in glassy lakes, and peasant villages pricked in their vineyards, and winds about to reflect the citadel rising in its forests, single eminence in the plain.

Here is a photo, though with words like that you hardly need it.

Stead, then living in Paris with Blake, had holidayed in Bavaria and Austria in the summer of 1930, spending August in Salzburg for the Mozart Festival. The publishing contract was secured the following April, and Stead:

… sat down in the kitchen of her flat and immediately wrote The Salzburg Tales, one day a story, the next day editing and ‘connective tissue’ … from beginning to end ‘because I’d just come back from Salzburg and was inspired by Mozart, because he has the most marvellously connected and creative brain in the whole world, I think.’ (Williams)

The Prologue is short and is followed by a chapter on The Personages. Stead describes actors and audience entering an open area before the cathedral for a performance of Jedermann (Everyman) which she herself had attended on August 1, 1930, and provides vignettes of all the ‘personages’ who will meet over the following seven days and tell stories for the amusement of their fellows.

According to Williams, many of the characters were based on people Stead knew. The Centenarist, who tells a number of stories, ‘was not pleased to find a copy of himself in print’; though the English Gentleman and the New York Doctor of Medecine were flattered. Bill Blake was the model for the Critic of Music as well as for some of the characters in the stories – Ernest Jordain, a polymath and Isidor, a poor Jewish boy. There is also a Little Old Lady in two of the stories who is probably Bill’s mother Rosa, who was living with them at the time, and with whom Stead had a difficult relationship.

The ‘connective tissue’ of the stories is that a few people gather and call on one or another of their number to tell a story. So, on the first day “a party from the ‘Hotel Austria’ went up into the monastery wood on the Kapuzinerberg in the morning to listen to the bells of the town and rest for some hours on the wooded height” and the Town Councillor tells the first tale, The Marionettist.

The tales themselves are difficult to place in time, most of them have a nineteenth century feel, though every now and again a car or even a television is mentioned. Only right near the end does the 1914-18 War come up, and even then it’s just mentioned in passing. I’m sure you could do a PhD on themes in the stories and their relation to stories in The Canterbury Tales, and for that matter in the Decameron and the Arabian Nights, but it is beyond the scope of this review, and beyond what I could glean out of a single reading (fractured over the past month).

Mostly the stories have the feel of tales being told, rather than the mixture of speech and action which characterises ordinary novel writing, but Stead is very clever at differentiating the tellers’ styles one from another. The tales are from all over. Some probably come from Blake’s Jewish heritage, some involve magic or ghosts, some are straight accounts of small incidents in the teller’s life, and there are two or three in which it gradually becomes apparent that the setting is Australia.

[Two young women mistake their way while walking in the Blue Mountains] They looked down and still saw the rolling ravined bottoms, full of tree-ferns, eucalypts and patches of burnt-out scrub.

“We will follow the same path tomorrow. I have heard of a new path for the descent: we strike off to the left and reach more shortly the Burrogorang Valley; there, where you see a clearing glimmering in the forest.”

Lilias looked down at the night assembling and massing in the gullies. It was there in its cohorts; its sentinels were climbing to the eyries of the cliff, it reconnoitred in the lofty escarpments. It was there in the clefts and scoriations of the precipice: it was running instantly and languorously, with the movement of irresistible floods over the endless sky. (The Schoolteacher’s Tale, On The Road).

If you are at all interested in Christina Stead, or if you are a fan of Angela Carter, say, then read this book. You don’t have to rush, read it one or two tales at a time before you switch out the light at night. I think there are more than a hundred, so it will take a while, but you won’t be disappointed.

I have reviewed Chris Williams, Christina Stead: A Life of Letters (here) and a number of her novels (click on ‘Stead’ under Tags in the sidebar) but the best place to start is at ANZLitLovers Christina Stead page (here)

*Modgeska, in Exiles at Home, says that Stead offered these stories to Angus & Robertson before leaving Australia in 1928, and was knocked back.