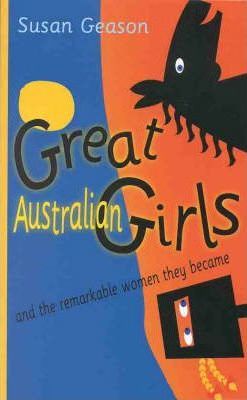 Before you tar and feather me, ‘Girls’ is Geason’s word, not mine, although  she attempts amelioration with ‘and the remarkable women they became’. And how Ned Kelly, or a female Ned Kelly – do they look like woman’s eyes to you too? – got on the cover I am not sure.

This 1999 book is a collection of biographical sketches of Australian women who shared “qualities like courage and determination, the strength to face adversity and obstacles and still fight on.” The idea of course, although Geason does not say so in her short Introduction, is to provide positive role models for girls when our histories, and the daily press, are so full of role models for boys.

As you might expect, the older stories are of more interest to me, some of the later stories might have been articles in the Women’s Weekly.

Mary Reibey (1777-1855) This is the most extensive account I’ve read of Reibey, who vies with Elizabeth Macarthur for the title of Australia’s first businesswoman. Mary was born in Lancashire into a middle class family. Her parents died early on and she was taken in by her grandmother and educated at Blackburn Free Grammar School. When she was 13 her grandmother died and rather than enter an ‘orphanage’ (a parish poor house probably) Mary ran away, stole and attempted to sell a horse, and although for a short while successfully posing as a boy, was eventually transported to New South Wales as a female convict on the Royal Admiral in 1792. Geason says as “part of the Second Fleet” but I think she is wrong about this, and in fact I think she relies too often on her general knowledge instead of looking things up, as for instance when she says “after a fast run across the Pacific … sailed through Sydney Heads”. In fact sailing ships came from England from the other direction, via Cape Town and the Southern Ocean.

On arrival in Sydney Town, Mary wasn’t selected from a line-up of new arrivals as a ‘wife’, but two years later, at age 17 she married Thomas Reibey, a ship’s officer with the East India Company. Reibey became a prominent businessman, firstly as a farmer on the Hawkesbury, then as the owner of small ships servicing his fellows on the Hawkesbury and subsequently the coastal and Pacific Islands trades. Thomas was often away and Mary was active in running the business, as she continued to do after his death in 1811, growing in prosperity and respectability for the next 40 years.

Geason mentions Mary Reibey’s diary, though not in her extensive list of sources, but here it is at the Mitchell (NSW State Library).

Louisa Atkinson (1834-1872) was born on her parent’s property, Oldbury, in the Southern Highlands of NSW. Her mother, an educated woman, daughter of a barrister, took over the property when her husband died two months after Louisa’s birth. There followed eight years of  moves and disruption, not to mention a disastrous re-marriage to an alcoholic, before Charlotte finally had James Atkinson’s will executed in her favour. The lesson Louisa learned from this was the one preached by many of my other Independent Women: “a woman without money and friends was at the mercy of men. Marriage was not the answer… A woman had to gain the skills and knowledge to earn her own living.” Charlotte before her had been an author – of the first children’s book published in the colony – and an amateur botanist. Louisa took up botany at an early age and at 19 started producing nature notes and drawings for the Sydney Illustrated News, and subsequently as ‘A Voice from the Country’ in the Sydney Morning Herald. With her friend Emma Selkirk she made long excursions into the Blue Mountains searching out new plant species –

On horseback, with their long skirts hiked up like trousers, the two would pick their way up and down steep ravines, through dense forest and undergrowth… One of their favourite haunts was the fern gully at the Kurrajong waterfalls, where they discovered several new ferns.

Sounds like the women in Christina Stead’s story ‘On the Road’ in The Salzburg Tales.

Louisa’s major work was an illustrated Australian natural history. In 1870 she sent the ms to famous botanist Ferdinand von Mueller but it was lost in the upheavals of the Franco-Prussian War. She also wrote a number of novels though Geason mentions only the first, Gertrude the Emigrant (1857).

Finally, aged 35, she married, but died a couple of years later in childbirth.

Mary MacKillop (1842-1909). I’ve been meaning to look into the life of Mary McKillop for a while and by this account she was a lively and determined woman. Leaving aside the nonsense of “Australia’s first saint”, she famously established an independent order of nuns, the Josephites, against the bitter opposition of Australian Catholic bishops.

In 1865 the three older MacKillop girls set off to Penola [north of Mt Gambier, SA] to start their school. Mary was 24, Annie was 17, and Lexie only 15. They started out teaching classes in their cottage and the local church.

In January 1866, by donning a simple black gown, Mary became a nun, the school became the Institute  of Saint Joseph of the Sacred Heart, and a new religious order was born. When she died, aged 67, Mary ‘left behind 750 nuns teaching over 12,000 children in Josephite schools in Australia and New Zealand.’

May Gibbs (1877-1969) was born in England and came to Australia when she was four. Her father attempted to farm poor country north of Adelaide before giving in and moving to Western Australia where he farmed first at Harvey, south of Perth, then at Butler’s swamp which is now the (inner) suburb, Claremont. (I once had a boss, a milkman, who remembered when cows were run on the South Perth foreshore). May had virtually no formal schooling, but at 20 she became a student at the new Art Gallery and then at 23 she enrolled first at the prestigious London art school, the Cope and Nichol, then after a brief interlude back in Perth, at first Chelsea Polytechnic then at Mr Henry Blackburn’s School for Black and White Artists.

Back in Perth again Gibbs found some work as an illustrator (eventually losing out to Ida Rentoul) but it was not until she moved to Sydney with her friend Rene Heames that she found consistent success. Bib and Bub, the gumnut babies grew out of her work illustrating the NSW Primary Reader and School Magazine, before popping up in Ethel Turner’s The Magic Button, then Gibb’s own books, Gum-Nut Babies and Gum-Blossom Babies appeared ‘just in time for Christmas 1916. Tales of Snugglepot and Cuddlepie came out in 1918 and the rest is history*.

There follow Marjorie Lawrence (1907-1979) who went from farm girl to international opera star to crippled by polio; Nancy Bird (1915-2009) pioneer commercial aviator; Linda McLean (1917- ) who wrote a memoir of her hardships during the Depression, Pumpkin Pie and Faded Sandshoes; Dawn Fraser (1937- ) the great Australian swimmer whose working class background rubbed too many ‘amateur’ swimming officials up the wrong way; Pat O’Shane (1941- ) a Yalanji-Kunjandji woman, ‘Aboriginal activist and magistrate’; Irene Moss/Kwong Chee Wai Lin (1948- ) characterised as ‘a fighter for justice’, the Race Discrimination Commissioner wife of the Chairman of Australia’s most rapacious bank (Alan Moss, Macquarrie Bank); Lorrie Graham (1954- ) photojournalist; Beverley Buckingham (1965- ) one of the best jockeys in Tasmania until the fall in 1998 which rendered her an ‘incomplete quadriplegic’; Heather Tetu (1967- ) trapeze artist graduate of the Flying Fruit Fly Circus and an early organizer of circus exchanges with China, left unable to perform  after a fall in 1992; Sonya Hartnett (1968- ) writer, whom I reviewed recently (here); Fiona Coote (1970- ) heart transplant recipient; Louise Sauvage (1973- ) multi gold medal winning wheelchair racer; Rebecca Smart (1976- ) actor, Buster in The Shiralee (1987), and Const. Donna Janevski in The Water Rats since this book came out; Tamara Anna Cislowska (1977- ) child prodigy pianist; Monique Truong (1985- ) girl.

Monique is definitely my favourite of the ‘others’. When she was 11, her parents’ Canley Vale (Sydney, western suburbs) house was broken into by a gang of schoolboys armed with pistols. Unhappy with what was there to steal they took Monique with them, eventually holing up in a Parramatta hotel –

[The leader] grabbed one of the single beds for himself, while Monique and the other boy shared the second one, a pillow between them.

In the morning Monique slipped a note under the door and was soon rescued, physically unharmed. However, as might be expected, she needed counselling and her family moved to Queensland, where they feel safer.

*Lisa, ANZLitLovers attended the session ‘The Real May Gibbs’ at the recent Bendigo Writers’ Festival