Skip to content
HomeDiary of a Bad Year, J.M. Coetzee 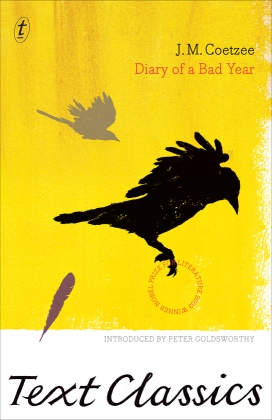 J.M. Coetzee – the initials stand for John Maxwell, I had to look that up – was born in South Africa in 1940 and there he made his name as a novelist. He was awarded the Nobel Prize for Literature in 2003. A year earlier he had migrated to Australia and has since become a citizen. We are blessed to have him.

His eighth novel Disgrace (1999) would seem to mark the end of his South African ‘period’. Since arriving in Australia Coetzee has written five more novels, of which Diary of a Bad Year (2007) is the third. In his introduction to the Text Classics edition (2012) Peter Goldsworthy writes of Coetzee that “each of his novels seems almost wilfully different from its predecessors.”

Diary is certainly “wilfully different”. It is written in three voices. The first, which occupies the top two thirds or so of each page is a series of opinions, varying in length from a few paragraphs to a few pages. The second is separated from the first by a horizontal line across the page and is the voice of an ageing author, living in an apartment tower in Sydney. The third, likewise separated from the second by a horizontal line, is the voice of his typist, the sexy Anya.

I read, and I will say right here, and enjoyed, the novel more or less as it appeared on the page. So, I would read the opinion piece until I reached a convenient stopping point on the following page. Then I would read the ageing author’s and then Anya’s sections, often, because they were shorter, a couple of pages at a time.

When I was young and politically active it was common to engage in debates about peoples, nations, governments and states, the distinctions between which are deliberately obscured in these days of government-induced anti-terrorist hysteria. As always, the class in control of the state apparatus must have an ‘other’ whom we the people are made to fear in order to justify their tightening hold on the levers of power. Coetzee in his first opinion discusses our complicity, but also what he regards as our helplessness, in living (and dying) within the bounds of the state, and cites the film The Seven Samurai as an example of people choosing to be ruled in return for being protected.

The Kurosawan story of the origin of the state is still played out in our times in Africa, where gangs of armed men grab power … Though these African military gangs are often no larger or more powerful than the organized criminal gangs of Asia or eastern Europe, their activities are respectfully covered in the media … under the heading of politics (world affairs) rather than crime.

The second opinion ‘On Anarchism’ begins well but ends in pessimism. We may choose Servitude or Revolt, but there is a third way “chosen by millions and millions of people every day. It is the way of quietism …”

And so we go on, from the general to the particular, discussing today’s ‘other’, Islamist terrorists, and how our quietism makes us complicit in the horrors which our governments perpetrate ‘on our behalf’.

Coetzee writes both as an Australian: “The Australian government … has been the most abject of the so-called Coalition of the Willing, and has even been prepared to suffer with no more than a tight little smile the humiliation of getting nothing in return.” And as a (former) South African: “The generation of white South Africans to which I belong, and the next generation, and perhaps the generation after that too, will go bowed under the shame of the crimes that were committed in their name.” And so will we, under the crimes, the indefinite imprisonment of non-white refugees, the war in Iraq, that are being committed in our names.

The opinions drift on to other matters, finally pitching up against God and the afterlife where I am less comfortable, and so on to the second section where they become more or less his random thoughts on life and literature, but well worth reading for all that.

The ageing author while doing his washing in the common laundry room runs into a pretty Filipina and attempts to engage her in conversation. Her name is Anya. She lives in a penthouse apartment with Alan, an accountant/financier. She is about 25 and she has a nice arse. After a while he offers her well over the odds to type up his work for him – a series of pieces for a book with contributions from six notable authors, to be published in Germany, entitled Strong Opinions.

He writes, “The passions and prejudices out of which my opinions grew were laid down long before I first set eyes on Anya, and were by now so strong – that is to say, so settled, so rigid – that aside from the odd word here and there there was no chance that refraction through her gaze could alter their angle.” But it does.

Then, 20 pages in, we start getting Anya’s thoughts too. Though as the ageing author – mostly referred to by Anya as Senor C and later, by Alan, as Juan, under a misapprehension that he is Colombian – reports what Anya says, and as Anya reports what Alan says, it is easy to lose track of whose opinion it is that we are reading.

Anya is bored by the political pieces and encourages the ageing author to write on other subjects, the books he reads and the birds he watches in the park. We think that she is keeping her distance, but later we learn that she is always aware of her power as an object of desire and subtly encourages the author to think that way about her, and right at the end we learn what genuine affection she has for him.

For a while this part of the novel is dominated by Alan’s schemes to steal the author’s considerable wealth, but after a drunken dinner à trois, this all comes to nought and Anya leaves him and moves up north to live with her mother.

Coetzee is obviously an important world writer, but he is also an important Australian writer. He writes yes that life goes on, but also that all the while our government is shaming us, and we would do well to heed him.