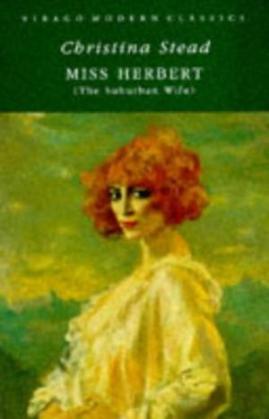 Miss Herbert (The Suburban Wife) (1976) was the twelfth of Christina Stead’s 13 novels – if you count her first, The Salzburg Tales as a novel, which I do, or 14,15,16,17 depending how you count The Puzzleheaded Girl: Four Novellas (1965), but anyway it was the second-last published; and the second set mostly in Britain. Cotter’s England was the first (not the ‘only’ as it says in Wikipedia, today at least) and For Love Alone, probably the most biographical of her works, ends up there as well. In fact, Miss Herbert in a way continues on from For Love Alone in that it uses the everyday details of Stead’s struggles to support herself in London before and after WWII, on the fringes of the publishing industry.

Christina Stead (1902-1983) was born in Sydney, moved to London, where she met her life-long partner Bill Blake in 1928. They lived for a while in Paris, spent the war years in the USA, sailed back to Europe in 1946, initially to Belgium. In 1948 Stead was in England working on Cotters’ England and some time after, but certainly by 1952, began work on Miss Herbert, which remained unpublished – I don’t know why – until 1976.

Miss Herbert is an odd book, or at least a book about an odd woman as she makes her way through her adult life. In some ways it is as though Stead set out to write an English Lettie Fox  (1946). Lettie Fox is a young American woman who knows what she wants – sex and marriage – and sets out to get it. ‘Miss Herbert’ wants to get married, to become a suburban wife, but has no real self-awareness and falls into sex almost by accident. The writing does not have the virtuoso quality of Lettie Fox or even of Cotters’ England but that is not to say it is not well written, but rather that it reflects very well the unreflective and maybe even stolid mental processes of its protagonist.

I should say the ‘Miss Herbert’ of the title begins life as Miss Eleanor Brent. Herbert is the name of an old county family from whom her mother is descended. Eleanor feels herself to be a Herbert and later in the novel when she is in need of a name this is the one she adopts. The novel starts with a reunion of school friends, old girls of Miss Appleyard’s academy. Some of the girls have gone on to university or commenced careers but Eleanor, living on a small allowance from her father

… was different. A nobly built beauty, playingfields champion, excellent student, loved at home, admired at school and by men, she had been happy and confident always. Her future was planned too; she was “an engaged girl.” But with all this, she was unsettled; she was only quite happy with women friends.

Her fiance, Robert, a doctor, is in a hospital ‘up north’ making his way through residency and so on. Eleanor takes a world cruise, becomes engaged to one or two other men while she’s away, and on her return lives with a young colonial businessman for a month in his London flat.

But she felt too active and intelligent for the idle mistress life and began taking correspondence lessons in writing with a Mr Beresford Banes who ran a Fleet Street literary agency.

She resumes her engagement with Robert and telling him that she is on a walking tour, gets menial work in a country hotel where she makes out with all the men, before returning to London, to a student hostel, getting by on odd writing jobs. And all the time talking about sex and free love with her girl friends, having men back to her room, holding herself out as inexperienced. Later, I had to re-read these early pages because when Eleanor, at age 30 or so, does finally fall into the suburban marriage she had dreamed of, she blanks out any recall of these encounters or holds them out to herself as innocent.

Eleanor is fascinated by the relationships of her friends, particularly those in de facto marriages or with long-term sexual partners, questioning them without regard to their embarrassment, maybe reflecting on her own status, as it was around this time, after many years living together that Stead and Blake were finally able to marry. Eventually she breaks with Robert for the last time and becomes engaged to Heinz, a Swiss who is an organiser for her mother’s church or religious society (I never did work out exactly what it was). She admits to him that she has had one or two lovers and he wants to know what they did, she must do for him what she had done for them. When he admits to lovers of his own “she ran wild with men, resentful and jealous: a fury burned in her; for a moment she wanted to go to the devil, roister, never marry – her heart burned. She would never marry the wretch.” But she does.

And settles down, has children, a girl and a boy, works hard in the house her in laws had bought, lodgers in the upper floors for a little extra income. Over time Henry – he insists on Henry rather than the foreign ‘Heinz’, dreams of a distant knighthood – works more and more away from home until at last he tricks her into going to live on her brother’s farm and claims to have been deserted. She never thinks of herself as not married, even when Henry begins to suggest divorce, but looks again to writing and to supporting herself and her children as a reader for publishers.

Life drifts on. She moves back to London. Men are still interested in her but she seems to have got out of the habit. Late in the piece she thinks she has fallen in love with her daughter’s boyfriend:

In the night, awake, she rose and fell, like a floating swimmer, on easygoing great waves of voluptuous joy, while thinking, Not for me, no,no, it’s all nonsense; it’s all past, not for me, no longer; how can it come now when it never came? It’s an illusion.

But it passes, she’s fifty after all, “Soon I will have my pension and then I am going to write the story of my life; then I will really get down to it; and it will open some eyes.”

see also:
Lisa at ANZLL’s Christina Stead page (here) for a full overview of Stead and her work, including links to reviews by Lisa, me and others.
Chris Williams, Christina Stead: A Life of Letters,1989 (Biography – here)

The British did it hard in the decade after World War II, with shortages of many basics and ongoing rationing. Sue at Whispering Gums a week or so ago discussed Australians sending food parcels ‘back home’ (here), and I noticed this in Williams while looking up background material for this review:

Christina’s family back in Australia helped her in those ration-stricken times in England. Her cousin Gwen and her sister Kate sent parcels of tinned meat, woollens, dripping and other essentials to her and her friend, Anne Dooley [the model for Nellie in Cotters’ England]. Christina wrote to Gwen in June 1949 that “… for those who need it most, the hard constant workers, the food is grievously, wickedly insufficient. Meat, that strength-builder, is in terrible shortage.”