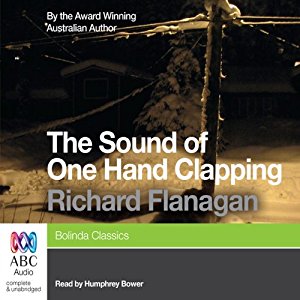 Why do we read? For different reasons probably, though we’re all very passionate about it. Do we read, and of course I mean do we read fiction, to be beguiled by stories, to while away the time, or to see revealed truths we had not previously considered? Or for some other reason. Ex-Mrs Legend – and I must remark here that this month marks 40 years since we met over books which we have shared and argued about ever since – berates me for my insistence on authenticity in my narrators, a subject which I suspect you too barely tolerate.

But to put it baldly, I think a novel with an inauthentic narrator is a novel into which the author has not put their heart. And that brings me to Richard Flanagan. Flanagan was born in 1961 of Irish stock and grew up in a mining town on the remote and rugged Tasmanian west coast. He has a M Litt in History from Oxford and his father was a prisoner of war on the Burma Railway.

Richard Flanagan knows Tasmania, he is a literary writer of some merit, he can tell a story.

Richard Flanagan is not a woman, and he is not a Slovenian refugee from World War II, but these are the characters he chooses for his protagonists in The Sound of One Hand Clapping (1997), his second novel.

Briefly, in 1954 a woman walks out of a workers hut into the snow, disappearing into the forest in deepest Tasmania, leaving behind her three year old daughter Sonja. The woman, Maria, was the wife of Bojan Buloh. They had married after the War and been accepted as refugees into Australia where Bojan was a labourer on the construction of dams for the Hydro.

Bojan is an alcoholic and violent. Sonja as a child is sometimes in his care – when he has work in Hobart – and is sometimes farmed out. At 16 she walks out on him, ending up in Sydney. Twenty something years later she returns to Hobart, seeking out old friends. It transpires that she’s pregnant, we hear much of her and Bojan’s back stories, they make contact, he’s still an alcoholic and it goes on from there.

This novel, and this novelist, are liked by lots of people, are almost certainly liked by most of you. But not me – not this novel anyway (if I remember correctly, I didn’t mind Gould’s Book of Fish). The principal protagonist is in fact the woman Sonja, and some of the things that Flanagan attempts I found risible – describing what she likes during sex, being pregnant, her waters breaking, having a baby, I laughed out loud when his (sorry, her) nipples began to leak at about 8 months. This is bullshit, stuff he’s read somewhere just the same as I have, what can he possibly have to tell me about being a woman? What he can he possibly have to tell you?

Sonja is ten years older than Flanagan himself, so Bojan is a good generation older. The descriptions of fifties and sixties Tasmania are researched, albeit informed by his and his family’s lived experience, even so he gets stuff wrong. Someone has told him that slowing down in an FJ (1950s Holden car) slows down the windscreen wipers, when in fact they actually slow down when the car accelerates.

I admit that Flanagan living where he did would have met or observed men like Bojan but why write a novel from Bojan’s, let alone his daughter’s, perspective? AS Patric demonstrates in Black Rock White City (here) that whatever we Anglos (or Celts) think, the lives of migrants/refugees out of war zones are complicated in ways that we can only dimly understand.

So, we get back to ‘why do we read fiction?’. We read light fiction and genre fiction for entertainment, to pass the time. The author creates an environment, sets up a scenario within that environment and brings it to a (hopefully) logical conclusion. In SF those scenarios might sometimes be read as a metaphor for the real world, and of course genre and literary fiction have very porous boundaries, but if the writer follows the rules of the world they have established then we are satisfied. We are entertained.

But is that why we read literary fiction? I think not. Literary fiction that is not just about the writing itself, tells a story not necessarily even with a beginning or an end but just a slice of one or more lives, with the intention of making us think about life or an aspect of life. And in my opinion, any genuine insight by the author can only arise out of their lived experience.

Flanagan is a fine story teller, but for as long as he remains unwilling to invest himself in his fiction (and I gather that at last he does in First Person) then he is just writing entertainments. We should not give his ‘insights’ in The Sound of One Hand Clapping any more credence than we give Helen Darville’s (Demidenko) in The Hand that Signed the Paper.

11 thoughts on “The Sound of One Hand Clapping, Richard Flanagan”