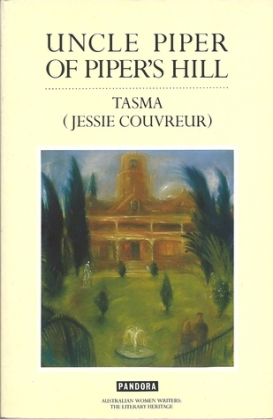 Sue of Whispering Gums has been blogging since 2009 and is now followed by probably everyone who reads and thinks about Australian books. Tasma’s Uncle Piper of Piper’s Hill is an Austen-esque portrait of post-Gold Rush Melbourne society and I’m glad Sue chose it to review.

The first thing to say about Tasma’s debut novel Uncle Piper of Piper’s Hill is that it’s rather wordy, speaking to a literacy different from that of today’s readers. For this reason, Uncle Piper won’t appeal to readers who like short simple sentences, and a plot which moves along at a good clip with little reflection or commentary. Consider yourself warned, but know also that, according contemporary reports, this novel made Tasma famous in a week.

So, if you enjoy immersing yourself in the writing of different times, and are interested in late 19th century Australia, Uncle Piper has plenty to offer, starting with well-drawn characters who, in modern clothes, would be as real today as they were in 1888.

Take father, the Uncle Piper of the title, and his son George, for example. Uncle Piper is a self-made man. In his case this involved emigrating from England, where he was poor and with few prospects, to Australia where, starting as a lowly butcher, he worked hard to establish himself as the wealthy, successful businessman he is at the novel’s opening. Now, what often happens when parents struggle to establish themselves and create opportunities for their children that they never had? Why, those children take their easy, comfortable lives for granted. That’s what! Not a new story, is it?