Skip to content
HomeTreasures from the Attic, Mirjam Pressler 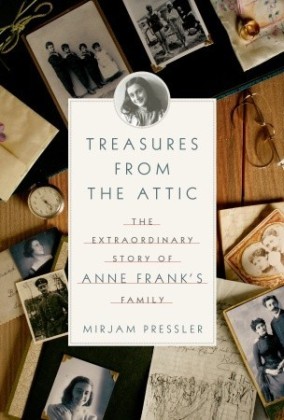 This is a difficult post to write. Not because I have any problems with the Anne Frank story. I don’t. Her diary is one of the iconic works of western, and Jewish, humanism. But because, as so many works about the Holocaust continue to appear, and to be reviewed in this corner of the blogosphere, I feel that the anodyne comments I have made to date conceal rather than represent what I think about Holocaust fiction in particular and Zionism in general.

So, it is time that I made my views clear in the hope that you will then forgive me if a) you disagree with me; and b) if I no longer comment on your posts about those two subjects.

My politics after a year or so at uni, from 1969 on, were (and remain) as I have discussed before, left-wing, anarchist and anti-war. But as well, at least partly in response to a strong (loud) right-wing Zionist movement at Melbourne Uni, they quickly became pro-Palestine and anti Israeli expansionism. Today I believe the Settler movement and the support it receives from the Israeli government is indistinguishable from Apartheid.

Like many ‘liberals’ I am torn about whether the British should have plonked the post WWII Jewish refugee problem – which they and all the Europeans were more than happy to deal with ‘off-shore’ – onto the Palestinians. But it was done, and in any case Zionism has a long history, and is now as much a fact as the Viking and Norman invasions of England. My argument is not that it should be reversed but that by behaving immorally (not to mention illegally) with regards to the Palestinians the Israelis are building up a store of trouble which will surely overwhelm them some time in the future.

My problem with Holocaust literature, and fiction in particular, is firstly with Jewish exceptionalism. Yes, we white Europeans are still horrified to discover what we were capable of in Nazi Germany, and the Holocaust is still within living memory. Anne Frank, if she had survived, would be two years younger than my healthy and active mother. But, while the blame for the Holocaust might lie with the Germans  – though they had plenty of willing collaborators throughout Europe who have not been so willing to own their share – Genocide is a world problem, the fallback position of demagogues in every country, however they use weasel words to disguise their intent.

I could mention Turkish Armenians in 1915, Rawanda in 1994, the Balkan wars of the 1990s, the shocking decline in the Indigenous population of Australia in the first century of white settlement. Arundhati Roy in The Ministry of Utmost Happiness (2017), which is written around Hindu persecution of Muslims, writes, aptly for my argument:

… there’s that other business that’s become pretty big these days. People – communities, castes, races and even countries – carry their tragic histories and their misfortunes around like trophies, or like stock, to be bought and sold on the open market. [p.195]

The point is not that Germans, or Turks or Serbs or Hutu or Hindu nationalists are bad, but that ordinary people everywhere are easily led, can be persuaded to kill, to look the other way, to fail to prevent others from killing in their name.

So my points about Holocaust fiction are that:

The Holocaust is not an argument in favour of current Israeli government policy towards Palestine – and may even be an argument against it.

More peoples than just the Jews have been the subject of systematic attempts at elimination.

Fictions about ‘good’ Germans, as To Kill a Mockingbird is about a ‘good’ white man in the South, are designed to make us feel better about being ‘upper’ – oh no, we wouldn’t behave like those Germans, those Vichy French, we would all be abolitionists or in the Resistance. The truth is the evidence suggests otherwise.

We do not need ‘historical’ fiction to remind us of the Holocaust. I write this and yet I wonder if it is true. Certainly we do not want the Holocaust used gratuitously as the background for otherwise unremarkable stories, but on the other hand survivors and their descendants are still dealing with the Holocaust every day. You only have to read Lily Brett’s Lola Bensky for this to be clear. Two recent posts – Lisa at ANZLL’s review of Belladonna by Daša Drndić (here) about failure to acknowledge guilt; and Emma at Book Around the Corner’s account of listening to and meeting F-H Désérable, the very young author of Un Certain M. Piekielny (here), put the opposite case.

“As F-H Désérable pointed out, it is only thanks to literature that we were all in this room, talking about people who died during WWII and thus acknowledging their existence and their horrible untimely death. I think that’s why dictators are often afraid of books.”

Are you still with me? I had better get to the book at hand, which I enjoyed but which I must warn you I listened to a few days ago and must review from imperfect memory. Treasures from the Attic (2012) came about when the wife of Anne Frank’s cousin decided to go through all the letters and memorabilia accumulated in the attic of the home in Basel, Switzerland which one branch of the Frank family had moved to, from Munich, in the 1930s.

Mirjam Pressler was selected by the family to write up the letters because she had previously edited the definitive (German) version of Anne Frank’s Diary. This is a story in itself. Anne apparently intended her diary to be published and from her first ‘raw’ version wrote a second, more polished version which differed in a number of respects from the first. Anne’s father Otto on coming into possession of the diaries after his release from Auschwitz, combined the two to produce the version first published and I think he may also have done the first translation from Anne’s Dutch to his native German.

The story – and it is fascinating to have so much background come to light on such an iconic figure – is in three parts, telling the lives of three generations of Anne Frank’s family:

Buddy Elias, Leni’s son and Anne’s cousin who had played with her when she was 9, who continued to correspond with her until the progress of the war made that impossible, and who gradually became the principal advocate of Anne Frank’s Diary as Otto grew older.

In the early part of the twentieth century Michael Frank had become a prosperous merchant banker in Munich with his three sons serving in the German army during WWI. Even during the hyper-inflation of the 1920s I think the family did ok, but with the rise of Nazism it was felt prudent to emigrate. Robert became an art dealer in London; Otto, the head of the family business after his father’s death, moved the bank to Amsterdam; Hector never settled down but eventually spent the war attached to the Elias’s in Basel.

Leni and her husband Eric(?) moved to Basel where Eric was the director of a German firm, but increasingly the Elias family’s income came from Leni’s business buying and selling the unwanted possessions of Jews fleeing Europe. They were joined in Basel by Alice and by Leni’s mother in law.

Pressler tells these stories, which are interesting in themselves, without ever losing her focus on Anne. Holland, despite declaring its neutrality on the outbreak of war, was occupied by the Germans in May 1940. Otto made increasingly desperate pleas to be allowed to emigrate, to the US, to England, to Cuba, but they were all refused. And as is well known, eventually went in to hiding with his family in the ‘secret annexe’.  By the end of the war 70% of the Jewish population of Holland had been deported and murdered (wiki).

Betrayed and shipped to Auschwitz, of the Otto Franks only Otto survived. On his release he was returned to Holland, although even there his citizenship was uncertain. His letters to Leni tell of Anne and her older sister Margot being taken away and of Anne’s mother dying of illness and starvation in the last few weeks before liberation.

Eventually the family is given a heart-rending account of the girls dying together in Bergen-Belsen by the last women to be with them.

Leni’s and then Buddy’s story pick up Otto’s life after the war and the rise and rise of Anne Frank’s Diary, the book, the play, the movie.

10 thoughts on “Treasures from the Attic, Mirjam Pressler”