This is Monday night, meant to be the end of my first day owner-drivering, but Dragan had an ’emergency’ on Saturday and called me in to work early – I almost never say no when I’m asked to work: first you knock back jobs, then you don’t get offered is a ‘rule’ engraved on my heart, or on my anxiety gene – while I was driving son Lou to the airport. Still one daughter, Psyche, with one day left of her holiday with us, but she gave me permission and off I went. Hopefully I’ll make it up to her with a trip to Darwin.

An odd, diverse, needed holiday, spent getting permits etc in place for the truck, and my back, a few visits to the physio to get it into place (successfully), a week with all the kids in town for the first time in a few years, babysitters in place for the grandkids and a night out in the city with ex-ML & the kids and their favourite cousin (Hi Cait), a couple of days in Melbourne with mum, coinciding with Michelle Scott Tucker’s book release – boy, is she (justifiably!) excited.

But, as I said, work. So no time for a leisurely setting up, just chuck in the bedding, tuckerbox, a few days’ fruit and veg, tools, work clothes. Hook up and go. Fuel up; run one trailer to Kewdale road train assembly area (near the airport a few km from the CBD); go back for a second, hook them up (pic above). It’s already late; head out of town and over the Bindoon hills. Sleep near New Norcia. Hook up a third trailer at Wubin, the northern edge of the wheatbelt, on the Great Northern Hwy, before the scrub and desert that stretch north forever. Destination Karratha, 1,500 km up the coast but 1,800 km by this inland route.

The first breakdown of my new career occurs an hour out of Wubin. The left hand steer tyre blows as I’m pulling out of a parking bay and the left side of the truck settles almost to the road. My first reaction in any breakdown is to despair, then to phone someone and share my despair, and only then to begin working on a solution. It has given me a reputation for being unmechanical – which is true – but ignores the fact that I generally get going again.

Unluckily the first 300 km out of Wubin is out of phone range – no towns, no mines – so I despair on my own. Until I see that I can jack the truck up by reaching my arms through the wheel arch and using blocks and two jacks to progressively lift the axle high enough to get the wheel off and the spare on. There are other problems, in particular the wheel nuts are too tight, but other drivers stop to help, and eventually it’s all done.

And that’s the key, “other drivers stop to help”. I’ll write a longer post one day about truck drivers and the Australian Legend, but suffice it to say for now that as long as long distance truck drivers preach and practice ‘stopping to help’ the old ways of the bush aren’t dead.

Because Dragan got me going late on Saturday, because of the time lost broken down, because my bloody airconditioner is out of gas, tonight I’m comfortably ensconced in a motel and I’ll unload in the morning.

I was going to write a ‘literary’ post about this trip, about the old towns Roebourne and Cossack that Daisy Bates came to 110 years ago and that Karratha replaced, but I’ve written about them before (here) so I’ll just mention my favourite artist, whose works of Indigenous-Impressionist grasslands I can’t afford, Marlene Harold of the Roebourne mob, Yinjaa-Barni (here). Not forgetting that tomorrow I’ll be unloading on the Burrup Penninsula, a gallery of Indigenous rock art with a history in millenia to match the Louvre and Notre Dame’s centuries, and as much significance, except in the minds of mining-mad Western Australians. 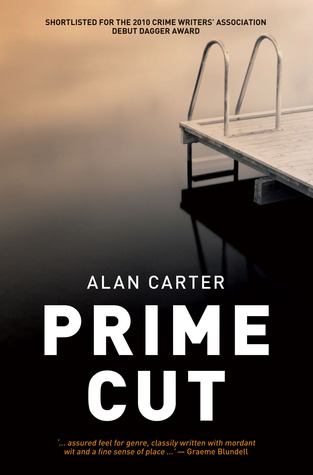 When I pulled up tonight I was three quarters of the way through Prime Cut, a Western Australian crime fiction novel. I wouldn’t give away the ending in any case (see this very interesting Daily Review article about ‘spoilers’) so this is as good as time as any for a mini review.

I don’t know Alan Carter but I’d be surprised if he’s not an English migrant resident in WA. The story begins with a double murder in England coinciding with Sunderland’s surprise win in the 1973 FA Cup then moves to the WA south coast, Kim Scott country, in the 2000s.

The protagonist is DSC Cato Kwong, demoted to the Stock Squad (investigating stock, ie farm animal, theft) for taking short cuts in a murder investigation. He is called to Hopetoun, coastal hamlet become thriving dormitory town for the new BHP (here called Western Mining) nickel mine outside Ravensthorpe 50 km inland, where an old very ex-girlfriend Tess Maguire is sergeant in charge of a two-person station.

Her offsider is Indigenous and there is a nod to the Cocanarup Massacre and the possibility of a non-white history for Hopetoun and Ravensthorpe.

A body, or at least a torso is washed up on shore – discarded by a frenzy of sharks – and subsequently a matching head washes up as well. Meanwhile a retired ex-copper from Sunderland now living in Busselton (also south of Perth but on the west coast) becomes aware of an old murder in Adelaide almost identical to the Sunderland one and of sightings of the principal suspect in WA.

The two streams of investigation come together (inevitably), a policeman is murdered on the jetty at Hopetoun  …

If you want to know whodunnit or if Cato has it off with Tess then you’d better ask me on Weds when I’ve had some driving time to listen to the end. Though I did mean to say that the reading is for the Association for the Blind, WA and that sometimes their readings are a bit flat. However, in this case their reader, Jim Malcolm, an Australian of British extraction by the sound of him, is a natural and does a good job.