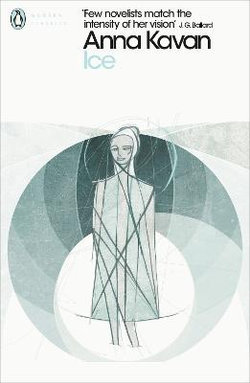 “Few novelists match the intensity of her vision,” JG Ballard
“There is nothing else quite like Ice,” Doris Lessing

Ice was first published in 1967 and republished in the Penguin Classics edition above in  2017. The sticker on the back indicates I bought it new though I don’t remember why, perhaps it was those testimonials from two of my all-time favourite writers.

Kavan, born Helen Emily Woods in 1901 (in France to English parents) had a troubled life. Her father suicided when she was 10, her mother married her off to her (mother’s) lover. She began writing in her twenties and published first under her (first) married name Helen Ferguson before legally adopting the name Anna Kavan, and changing her hair from brunette to ice blonde, in 1940. She had multiple hospitalizations for depression and a lifelong heroin addiction (wiki). She has a considerable body of increasingly experimental work to her credit. Ice was the last work published before her death in 1968.

1967 was the year of Lucy in the Sky with Diamonds, the Monterey Pop Festival, The Ticket that Exploded, Ballard and Lessing were both established writers, I was a year or so away from university and already started on the edgy science fiction of Phillip K Dick, John Sladek and Robert Sheckley. The USA and the USSR were held back from annihilating each other and us all only by the certainty of MAD.  France was testing nuclear weapons at Mururoa.

This is the context that produced Ice.

The world is coming to an end as nuclear winter leads to walls of ice converging from the poles towards the equator. As individual countries break down into lawlessness our protagonist, a guy, seeks his old love, an ice blonde wraith who is currently living with his rival. In sunshine he makes his way to their retreat in the country. His rival stands back, is condescending. She doesn’t trust him, turns away when he approaches, chooses to stay. As he leaves, snow begins to fall. He knows the girl’s relationship with his rival is abusive.

She goes abroad, or is taken – it feels like from England to Norway, but nowhere, no-one is named. He makes his way by sea to the northern country where the girl is with/being held by the Warden, his rival, the local military commander. Social structures are collapsing as the ice approaches.

The whole short novel, 180pp, a fable Kavan said later in answer to criticisms that it has no plot, is a dream/nightmare as the protagonist braves ice and war to get near Her only to lose out and have to restart as his rival becomes increasingly powerful in regional and then world terms. As with any dream, we proceed in discontinuous fragments. She is consumed by ice, by marauders, is sacrificed to a dragon

Armed men came up, pushed me back, seized her by her frail shoulders. Big tears fell from her eyes like icicles, like diamonds, but I was unmoved. They did not seem to me like real tears. She herself did not seem quite real. She was pale and almost transparent, the victim I used for my own enjoyment in dreams… The men did not wait any longer but hurled her down, her last pathetic scream trailing after her.

As with Ballard, the post-apocalyptic world is just a backdrop for the disintegration of the protagonist. The real theme of the novel is that the woman fears her rescuer, fears most of all that if she trusts him he will let her down. Even when he does at last rescue her, takes her to a Pacific island, she turns away from him, tells him to leave, and when he does, takes that as proof that she must not rely on him. Been there!

The guy leaves, fights a few wars, meets up with his rival, now Supreme General, has a change of heart and fights his way back to Her. The ice has nearly reached the Equator. He persuades her to ‘escape’ with him. There will be no escape.

The point is that the girl is a victim:

Fear was the climate she lived in; if she had ever known kindness it would have been different… All her life she had thought of herself as a foredoomed victim.

Systematic bullying when she was most vulnerable had distorted the structure of her personality, made a victim of her, to be destroyed, either by things or by human beings, people or fjords and forests; it made no difference, in any case she could not escape.

This is Kavan writing out her pain. Ignore the male protagonist, he is not Kavan’s focus, merely the instrument of the girl’s suffering, her suffering. Ignore the SF, Kavan just needed a setting to explore victimhood and nuclear winter was topical. I have not read Kavan before, now I am interested to know if Acker or Ettler did. Kavan seems like a precursor. The results of Googling ‘Anna Kavan Kathy Acker’ suggests that others have had the same thought.