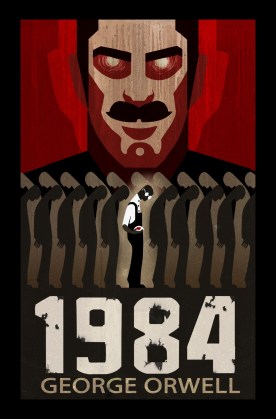 That I have reviewed two classics one after the other (Pride and Prejudice and 1984) is just a coincidence based on what audiobooks become available at my local library, but if I had the chance, classics would be all I read. And some new releases I suppose, one must ‘keep up’. Of course I’ve read them both before, but that’s why they’re classics – they stand, demand even, re-reading.

I pick up Orwells as a matter of course whenever I see them second hand and in looking for my copy of 1984 for this review I see I have a a few yet to be read – The Unknown Orwell, A Clergyman’s Daughter, Collected Essays, The Road to Wigan Pier, Coming up for Air – so expect some more reviews.

As a young man growing up, 1984 was in the distant future, a dystopia hanging over us in a way that is difficult to explain now that it is so far in the past. Later,  we congratulated ourselves that we had dodged a bullet, but what shocked me on this re-reading was Orwell’s prescience. The Introduction to my edition points out how many concepts from 1984 almost immediately entered the language:

… in common use by people who have never read the book – for example Newspeak, thought-crime, Big Brother, unperson, doublethink – most relate to the power of the state to bend reality.

These concepts, and particularly doublethink, “the power of holding two contradictory beliefs in one’s mind simultaneously, and accepting both of them”, are at the core of right wing orthodoxy today.

1984 was Orwell’s last work, written in the immediate aftermath of WWII. The right, of course, promptly adopted it as an attack on Stalinism, which indeed it was, while ignoring any meaning it might have for their own tendency to totalitariansim. Orwell’s anti-Stalinism was not anti-communism, though the right and their fellow travellers in the ‘centre’ like to conflate the two. Orwell was clearly of the far left, he admired the anarchists in Spain, though he chose to fight with POUM who were basically Trotskyite (my review of Homage to Catalonia). The Republicans probably lost the war in Spain because the Soviet-supported Communists were as dedicated to defeating POUM as they were to combatting Franco. When the Republican government rounded up the leadership of POUM, Orwell was lucky to escape with his life, and this of course informs 1984, where the ruling Party is led by the Stalin figure, Big Brother and the shadowy opposition by Goldstein, clearly standing for Trotsky.

For a novel of such universal themes 1984 is suprisingly provincial. The ‘world’ it describes is the drab, post-war London of socialism, shortages and rationing. The world is divided into three blocs who have fought themselves to a stalemate. England belongs to the Oceania bloc of Great Britain, North America, South Africa and Australia, but Orwell makes no attempt to explain how English socialism prevails over US capitalism, nor how the UK is never overrun by Eurasia (Europe/Russia/South Asia).

Society is divided into Inner Party (Ruling Class), Outer Party (Middle Class) and Proles. The Inner Party rules by doing its best to prevent casual sex, channelling the resultant sexual frustration into political hysteria, with cameras and microphones everywhere so that the Thought Police may monitor every person’s activities, and children encouraged to report on their parents.

London today has an ‘Orwellian’ 500,000 cctv cameras in public spaces, though they’re probably not as informative as our communications and search records, with computer algorithms taking the place of the Ministries of Love and Truth in analysing and storing the resultant data, all available to the government and the police at the push of a button (or to you, if you want to watch, here).

At the core of the story is 39 year old Winston Smith, a minor bureaucrat whose job is to rewrite past newspaper reports so that they do not contradict current ‘truths’. Smith, who has one failed marriage behind him, lives a lonely and largely sexless life, though he did once give in to a hideously painted prole prostitute (for a socialist, Orwell is very ambivalent about the Proles). Smith is discontented with his life and has begun writing down anti-State thoughts in a journal he found in a junk shop. He becomes aware at work of a younger woman who appears to be paying him some attention. Although at first he fears she may be an informer for the Thought Police, he meets her and they become lovers, meeting first in parks then in a room he rents above the junk shop.

When they are, inevitably, betrayed the novel follows two courses, the Political and the Personal. Smith undergoes months of imprisonment, torture and indocrination to force him not just to agree with the Party, to engage in doublethink whenever he thinks he knows two facts which are at odds, but to internalise his agreement, to love Big Brother.

The Personal, the horrors of Room 101 which force Smith to disavow his feelings for Julia, his lover are well known, and anyway, as with many dystopian works, are merely a vehicle for the real message.

It’s clear that Orwell’s cynicism about ‘truth’ or about our leaders telling us the truth was a direct result of his participation in the war in Spain. In Looking Back on the Spanish War he writes,

As far as the mass of the people go, the extraordinary swings of opinion which occur nowadays, the emotions which can be turned on and off like a tap, are the result of newspaper and radio hypnosis. In the intelligentsia I should say they rather result from money and mere physical safety. At a given moment they may be ‘pro-war’ or ‘anti-war’, but in either case they have no realistic picture of war in their minds.

As a participant, he was able to make the comparisons first-hand between what was happening in Spain and what was reported in European newspapers:

I saw great battles reported where there was no fighting, and complete silence where hundreds of men had been killed… I saw, in fact, history being written not in terms of what happened but of what ought to have happened according to various ‘party lines’…

This kind of thing is frightening to me, because it often gives me the feeling that the very concept of objective truth is fading out of the world. After all, the chances are that those lies, or at any rate similar lies, will pass into history.

The middle part of the book is taken up with Smith reading a critique of the Party, The Theory and Practice of Oligarchical Collectivism, by the rebel leader Goldstein, a pretence to get us to absorb a lot of Newspeak and Doublethink theory.

The war between the blocs is explained as very little to do about territory gained and lost, and all to do with motivating members to unquestioningly support the Party – reprising the anarchist argument War is the Health of the State. In reality –

the war is waged by each ruling group against its own subjects, and the object of the war is not to make or prevent conquests of territory, but to keep the structure of society intact.

I won’t take the theory lesson much further except to point out the almost exact parallels between the orthodoxy required by the Party in 1984 and the contortions of apparently intelligent people on the right of politics today to hold, and to insist that we also hold, beliefs that are completely at odds with what we, and they, know to be true.

To tell deliberate lies while genuinely believing in them, to forget any fact that has become inconvenient, and then, when it becomes necessary again, to draw it back from oblivion for just as long as it is needed, to deny the existence of objective reality and all the while to take account of the reality which one denies – all this is indispensably necessary.

George Orwell, 1984, first pub. 1949. My copy (not pictured above) Penguin 1989 with Introduction by Dr Peter Davison [I sourced the illustration from another blog (here) but couldn’t identify the illustrator. Tetiana Aleksina who often ‘likes’ my excursions into SF might have more info.]