Skip to content
HomeJournal of a Journey, Joseph Hawdon 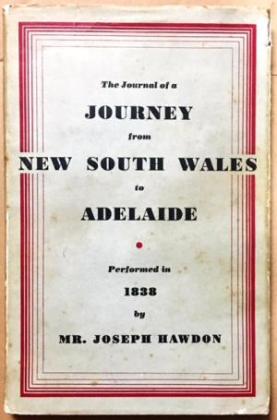 The full name of the journal (as you can see) is: The Journal of a Journey from New South Wales to Adelaide Performed in 1838 by Mr Joseph Hawdon. It’s a slender hardback of 66pp, published in 1952, so 114 years after it was written, from mss in the SA State Archive, the Mitchell Library (NSW), and in the possession of the family. My father has inscribed his name on the flyleaf and the year 1959.

Hawdon arrived in Sydney from England in 1834, joining his elder brother John who had already established himself with properties at Cowpastures (outside Sydney, and presumably neighbouring the Macarthurs) and then at Bateman’s Bay, though at the time of this journal John was on their Howlong property on the ‘Hume’ (the Murray). In 1836, “Soon after my arrival at Port Phillip, I formed a cattle station midway between that Settlement and Western Port” (at Dandenong according to ADB).

Hawdon writes, “Towards the end of last year (1837) I determined on making the arduous experiment of driving Cattle, for the first time since the colonization of New Holland, from Eastern to Southern Australia …”. His journey took him northeast from Port Phillip, then west following the Murray (map). Along the whole way he encountered local Indigenous people and relations were generally friendly.

My map of major Aboriginal languages (here) shows all of central and western Victoria belonging to the same family. I have sourced a more detailed map (here), and the SA section of the AIATSIS map (here). I’m sorry that’s the best I can do to name the people whose country Hawdon and his party passed through. Hawdon writes that he talked to the locals and his comments accord with my map of major languages – “The languages of these tribes [west of L.Bonney in SA] is different from that of the tribes near the junction of the Murrumbidgee [north of Swan Hill], and the people are of a much milder and more friendly disposition.” Lake Bonney was known to the locals as Nookamka, “but in virtue of my privilege as its first European discoverer” he named it after his travelling companion Charles Bonney.

Hawdon speaks to Aboriginal people all along the way, but fears them too, often waving his gun at or shooting near them, though funnily enough the person who came nearest to being shot was Hawdon himself when one of his men in fear of his life took a shot at a charging bullock, and missed, the ball grazing Hawdon’s chest.

Setting out on Jan. 1 from his own station, 17 miles SE of the Port Phillip Settlement, “crossing a small range of hills, wooded with stringy-bark, the rest of the journey [to Melbourne] was through an open forest well covered with grass”. Think of that next time you’re on the Monash Freeway.

Jan. 2. Breakfasted with Captain Lonsdale, the Police Magistrate, who also lent him a dray. Then set off in company with the Postman. Picked up Bonney at “Mercer’s Vale” (Beveridge) and crossed over the Great Divide (at Pretty Sally I guess), arriving at the Goulburn River on Jan. 5. Took 2 more days to reach Howlong, near Albury, on the north side of the Murray. There the postman exchanged mail bags with the postman down from Yass. So the overland mail service, which Hawdon instigated, involved three 180 mile stages – Sydney-Yass by coach, then Yass-Howlong and Howlong-Melbourne.

Selecting cattle from the herd which he and his brother ran at Howlong, he swam them back over the river which he describes as being 100 yards wide with a strong current. I’ve swum in the river above Albury and that’s much wider than I remember but I’m sure the Hume Weir upstream makes a big difference.

They return to the Goulburn River, battling sand and lightning storms. He never says he regrets making the trip mid summer but he may well have. A bit of winter rain would have made the long sandy stretches later in the journey much more manageable, and would also have meant more feed for the cattle. Bonney has 1,200 sheep, which some days later escape in the night and make their own way home.

Finally, on Jan. 22, they set out. Following the Goulburn and then the Murray, though staying a bit south as they cross the Campaspe and the Loddon. Near present day Mildura they use a sandbar to cross to the north side of the river and then almost immediately come on the confluence with the Darling (much of this country was ‘known’, having been reported on by Major Mitchell after his expeditions of 1835 and ’36) which they ford without difficulty, on March 1.

On March 4 he ‘discovers’ a lake which he names Victoria and which I didn’t know existed (there’s no road north of this section the Murray). The country is mostly rolling sandhills and the only feed for the cattle is the reeds along the river. Further along, he is separated from the river by high – he says 200-300 ft – limestone cliffs and each night must find a pass down to get the cattle to water.

By Mar 10 they are in South Australia and ‘discover’ Lake Bonney. When the river turns south (Overland Corner) they start looking out for the ranges which separate them from Adelaide. At Mt Barker, Hawdon can see across to Lake Alexandrina (through which the Murray drains to the sea) and then they must conduct the cattle down the precipitate slopes of Mt Lofty to present day Noarlunga and so on to Adelaide (settled a couple of years earlier) 20 miles back up the coast.

I won’t stretch your patience by including quotes, but Hawdon’s descriptions of the country he passes through, of the plentiful birds, fish and kangaroos, and of the people he encounters nearly every day make this a book well worth seeking out – especially for Victorians and South Australians who will recognise many of his descriptions.

For Hawdon’s history after 1838 an excellent starting point is Janine Rizzetti (The Resident Judge)’s alternative blog Banyule Homestead (here), as Hawdon was its original owner.

Joseph Hawdon, The Journal of a Journey from New South Wales to Adelaide, Georgian House, Melbourne, 1952

On Feb. 22 Hawdon recorded: “On the opposite bank of the river in front of our tent, were a tribe of Blacks having their bodies painted in white streaks… I think this might have been part of the tribe that attacked Major Mitchell in 1836.” The date accords with Hawdon being in the region of Mt Dispersion, between Robinvale and Red Cliffs, where Mitchell ambushed and killed Aborigines he said were threatening him. I plan to look into this in a future post.

12 thoughts on “Journal of a Journey, Joseph Hawdon”