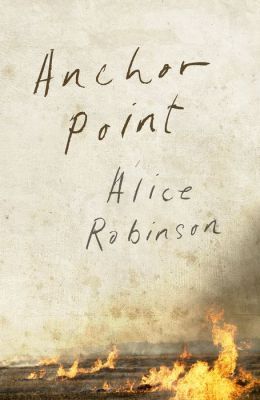 Alice Robinson is a Melbourne-based author, I can’t tell you her age but she doesn’t look very old (here), and more disappointingly I can’t tell you whether or not she grew up in the country. But this is her debut novel, impressively long-listed for the Stella, after a PhD in creative writing. I worry about novels like this, straight out of school, that the story follows a formula designed to suck me in and I am. But before my criticisms get out of hand, let me say right at the beginning that Laura, the book’s central character engaged me and I was very invested in learning more about her.

In many ways Anchor Point (2015) is a worthy newcomer to the long line of books I have been studying and writing about as I delineate the myth of the Independent Woman, particularly in the setting of the Australian Bush which has been and still is claimed for the archetypal Australian man, ‘lone hand’, larrikin soldier etc.

Although set in the 1980s and 90s – in a fictional location in the foothills of the Alps in north eastern Victoria – Laura’s story embodies in one generation the dichotomy between the pioneering settler of Australian legend on one hand and Indigenous land claims, climate change and land degradation from over clearing, on the other.

Laura herself embodies almost from the time her sister Vic is born, when she is five or six, the ‘drover’s wife’ (here) condemned to kitchen servitude and drudgery (although not, in this case, endless childbearing), to support the intrepid pioneer, her father. A servitude she adopts, in the house and out on the property, through the disappearance of her mother when she is ten, through the schooling of her sister, through to her own reluctant bid for independence as the partner of another needy, controlling man in Sydney, and finally to her return to the farm to care for her father and the property when her father falls victim to early onset alzheimers.

The book is written in the third person entirely from Laura’s POV. Her father, Bruce, himself the son of a failed farmer, has bought a couple of hundred of acres of bush which he plans to clear in order to farm sheep. Kath, Laura’s mother, is a German-born potter, who ‘neglects’ her housework and her daughters to pursue her art. Both the housework and the care of Vic increasingly fall to Laura.

Do we feel for Kath? We all felt for Katherine Mansfield last week (Who Does the Dishes?), are their situations the same? Bruce, all pioneers, all men maybe, have this expectation that women will keep house while they get on with the real work. Does Laura feel for Kath? Not really, certainly not after she gets a black eye when she drops one of her mother’s vases. Bruce and Kath spend another night arguing, there’s a storm, the creek floods, Kath disappears. Laura’s own actions are not above reproach (no spoilers!), but she picks up the slack, Bruce brings in men to clearfell the trees, Laura drops out of school and becomes a farmer alongside Bruce.

Her only friend is Joseph, an Aboriginal boy her own age, a token? No, but nearly. He may have been her romantic interest but in the end is not. In fact, this novel is like those movies of the book where a number of characters are conflated into one. Where in real life we might take up with a dozen others before coming upon our partner for life, each of the girls meets one man and that’s it. And poor old Bruce meets no-one.

It is telling that when we finally learn more about Kath it turns out her name is actually Katya, which Bruce had insisted on Australianising. Bruce stands in for all those settlers right back to 1788 who insisted on farming methods brought with them from England. You can only shudder as all the trees are removed, all the way down the hill to the creek, and he even regularly threatens to chop down the ‘canoe’ tree in the yard of their modest house.

The drought years which come increasingly often are a marker for climate change. In the end Laura makes mostly futile efforts to re-forest the ruined land, promises it to Joseph who wants it for Indigenous access, then must renege and sell-up, probably to developers for housing, as her own health declines.

In the last chapter Laura is with Vic, in Vic’s apartment on the 33rd floor, the power out, looking out on a Melbourne ringed by bushfires. Anchor Point, intended as a parable for our times, I guess is that, but works best as a character study of Laura and her relationships – to her father, to her dependent sister, to Luc, her dependent partner, and to her absent mother.

Jessica White’s review (here). And Jess did grow up on the land, in cotton country, cleared and levelled to within an inch of its life.