If I thought I had been Draganned last week, it only got worse! I upset a customer, Dragan got angry. I loaded my trailers on Thursday, he held me over (in Sydney) till Friday. We argued. He harangued me about how ungrateful I was. I spent all Friday stacking freight for one customer around the freight of another customer, on another driver’s trailers, and took off for Perth the minute we were finished. An hour out … it goes on and on. In the next 24 hours I was diverted around the countryside and swapped the combination I was towing twice, as other drivers had problems. And still we’re fighting.

I’ve had my truck serviced – the oil alone costs $600 – on the basis that the company will want me to do one more trip before Christmas, but that is looking increasingly problematic. Last night I picked Milly up from her Tuesday meeting and we went for a late meal at Neho, a Korean fusion restaurant in Vic Park. Very popular. Great food. And happy to squeeze us in before they closed the kitchen. Anyway, Milly: it’s time I stopped living the Legend and spent some time in Perth doing family stuff. So one way or another, no more Dragan in 2019. 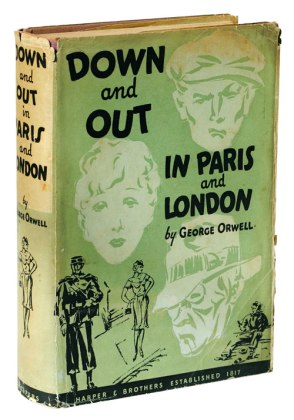 On the way here I listened to Orwell’s Down and Out in Paris and London (1933). I thought I had a copy at home and could write a proper review. As it turns out I have lots of Orwell, but not that one, not on the shelf where it should be anyway. What I do have is a biography, The Unknown Orwell (1974) by Peter Stansky & William Abrahams. They write:

It can be argued that of all the books he discovered while at Eton, the one that was most to affect him was Jack London’s The People of the Abyss. Years later it would have a direct influence upon the writing of the first book he was to publish, Down and Out in Paris and London. As an Etonian, [he] read of the ‘abyss’ and incorporated it into his fantasies and life. Written in 1903, the book was (and still is) a vivid,  powerful and appalling first-hand account of poverty in the East End of London in the summer of 1902 …

I was a big Jack London fan years ago, but that was one book I could never find. Orwell, born Eric Blair (1903-1950) was at Eton from 1917-21. From there he went directly into the Imperial Police in Burma, from which he resigned to become a writer in March, 1928. He began almost straight away to get essays accepted, including, in 1929, The Spike, an account of his experiences living as a tramp in England [And also the name of chapter in London’s book]. I say “living as” because it was clear he always had options available to him, to borrow or earn money, which real tramps didn’t, and his account was actually the conflation of a series of experiences separated in time. Interestingly, he says he never attempted to modify his Etonian accent, and in fact was sometimes offered, and accepted, better treatment on the basis of his obvious gentleman-ness. A ‘spike’ if you’re wondering was a dormitory for the homeless. Tramping was mandated by the law that specified a man (or woman) could only stay in a given spike once in any month. Amazingly, it was an imprisonable offence to enter a spike with more than a few pence in one’s pocket.

Although Paris precedes London in the book, he was actually in Paris after this, in the Latin Quarter, and became a scullion – my son says “dish pig”, a job he often turned to as he scraped through his seven year Bachelors degree – after having all his money stolen by a prostitute he brought back to his room. In the book, not to offend his mother’s sensibilities, he says it was a young Italian.

He put the two stories together and eventually found a publisher in Victor Gollancz, who also came up with the title. (I looked, unsuccessfully for a Gollancz cover, but don’t you love the one I did come up with). It was at this stage that he adopted the pen name George Orwell. Down and Out is journalism/memoir with the names changed, a form I think he used again in The Road to Wigan Pier (1937), but I’m pretty sure Homage to Catalonia (1938) which I reviewed here, is straight memoir.

Orwell, like London, was confirmed in his socialism by his experience of the actual living conditions of the underclass. But he had a strong libertarian streak which made it impossible for him to be a Party member, and which enables the Right to present him, wrongly, as on their side. He doesn’t judge his fellows, neither the fact that they have fallen so low, nor their behaviour, and is scathing of government policies which forced men willing to work to spend all their time and energy tramping between spikes and cheap lodging houses. He even suggests an alternative, accommodation with land attached which the homeless could use to grow their own vegetables. As it is, their principal sustenance was cups of tea, bread and margarine. I think that what he finds saddest is the loneliness, the impossibility of these men even meeting women, let alone being in the position to marry. He is also scathing about the cleanliness – or lack of – of French hotel kitchens, so you’ve been warned!

Orwell doesn’t mention the Depression. I have a very clear conception of the Depression years (1929-39) from Australian and American literature, but not so much from British and European lit. and perhaps anyway the bulk of his experiences predate the Wall Street Crash of September 1929 from which the Great Depression is usually dated. Stansky & Abrahams say extreme poverty (in Britain) was very similar in London’s and Orwell’s works, which are a generation apart, and no doubt right up to and beyond the War (as we see in Cotter’s England for example).

Last but not least, he relates some shockingly anti-semitic stories for no discernable reason, and I think it is more than “just the times”. Orwell is a writer I admire, and I need to follow this up.