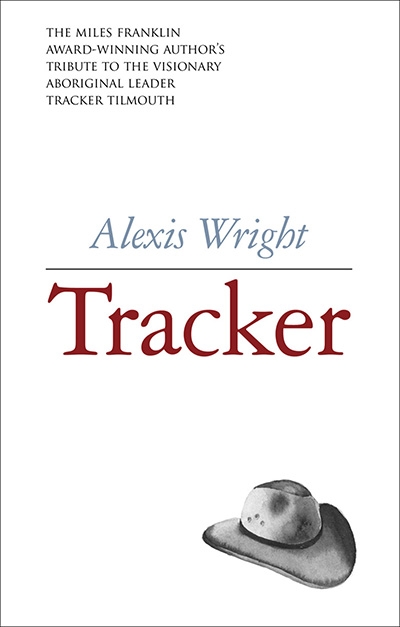 Tracker (2017) is Alexis Wright’s Stella Award winning ‘biography’ of Central Australian Aboriginal activist Tracker Tilmouth (1954-2015). Known during his childhood as Bruce, and officially as Leigh, he should now, I think, as a late Arrente man be called ‘Kwementyaye’ Tilmouth, but I will continue as his friend and biographer Wright does, with ‘Tracker’.

Tracker is a giant of a book, 620 pp, a collage of overlapping interviews and stories, told by Tracker himself with very occasional prompting from Wright, and by his friends and colleagues.

Tracker Tilmouth: My political education began at a very young age when Lois Bartram, the housemother of our cottage on Croker Island Mission, read … to my brother William and me … Cry, the Beloved Country.

I went to Croker when I was three or four years old, with my younger brothers [William and Patrick].

Lois Bartram: I went to Croker in 1956, and Bruce came in 1957. I was twenty-five … I had done general nursing training and mid and infant welfare.

My family and grandparents on both sides lived in Nullawil … in north-western Victoria, and were farmers in the area.

We heard at the beginning of the year that these three brothers were coming but then they didn’t come… I learnt years later when I met the boy’s Aunty Doreen that she and her husband had gone to court to gain custody.

The law that said children could be removed had just been changed. It had been repealed so that they could no longer be removed but the same bureaucrats were still in power, and they got around it by charging the kids with being neglected.

Patrick Tilmouth: Sister Bartram was a good lady. And a tiny lady, she was only tiny. She put the fear of God into all of us.

And so it goes on – these are only excerpts, each ‘story’ is generally two or three pages. The Arrente people are from the area around Alice Springs, but it was policy to send the children far enough that they could have no contact with their families, and so the boys went to Darwin, to the Retta Dixon, a “drafting yard” from whence children were distributed. Their five older half-siblings, “because their skin was fairer they were sent south.”

They were lucky with Lois Bartram, who loved and educated them, took them home with her on holidays (Tracker caused Nullawil’s first race riot during a game of cricket when he refused to be given out); and also with Croker Island where they were free to roam about and catch and ride the local ponies.

Tracker eventually does a bit of high school in Darwin, returns to Alice Springs, spends some years on a cattle station, meets his father, does a lot of hell-raising, begins to be involved with the Central Land Council, gets a degree (in Agricultural Science, I think, though he refers to himself as an economist) at Roseworthy in South Australia, lives and works with communities, particularly around Docker River on the WA border, and finally, with little fanfare, we find him assistant Director and then Director of the CLC. And from there he goes on to Indigenous politics, prawn farming, and advising on Aboriginal economic ventures.

Tracker’s story, which as you can imagine, does not proceed in straight lines, concerns his wide range of contacts through Indigenous, State and National politics, as well as of course all the actors in the Central Land area, and indeed throughout northern Australia; and his core belief that Aboriginals must achieve economic independence, and that all else is just gifts from their white masters.

Self-governance for Aboriginals is a myth. Property rights are a myth. The land is vested in the Commonwealth Government and indigenous people are permitted to live on it with conditions. Aboriginal bodies are invented, funded, appointed by Government. Government chooses from whom it will take advice – Tracker is very, very angry, and often very funny, about Black intellectuals, about the Dobsons, Marcia Langton, Warren Mundine; White people, failures down south, come to communities as workers, mechanics and end up Administrators; Black bureaucracies, the Northern Land Council in particular, follow the rules, “Stay between the lines”, collect their salaries, their constituency not communities but their paymasters, Government.

Tracker is a lifelong member of the Australian Labor Party, was certain to become a Senator, but was sabotaged, vilified by the man he was to succeed, Bob Collins, who subsequently suicided before he could face charges relating to sex with children. Nevertheless he is adamant that property rights for traditional owners, which logically flowed from Mabo, was hijacked by the Government acting for white interests, first by Paul Keating and then John Howard, that the Native Title Act confers nothing, no right to occupy, just the minimum of royalties from mining, soon squandered on salaries and fleets of white Toyotas.

Tracker led the CLC to buy up cattle properties in the NT, as there was a sunset provision in the Native Title Act which meant that up till a given date Native Title would be automatic on Aboriginal owned properties. His big success was Mistake Creek which has always been profitable, but his dream is horticulture based on the good soils and underground aquifers of much Aboriginal land.

Eventually, another case will make its way to the High Court, the Native Title Act will be thrown out and the original inhabitants will be granted full property rights to all unalienated land.

The next task is to find a model for community ownership. Tracker was greatly attracted to the Israeli Kibbutz Movement, both for their successes in desert agriculture and for their communal governance. The Governments’ policies divide and rule, deliberately causing divisions even within language groups. Abbott, at the time of writing still prime minister, in particular attempting to enforce a ‘white picket fence’, assimilationist, individual ownership model.

Tracker Tilmouth was a man bursting with ideas, and I have barely touched on them here, bursting with stories, riding racing camels, driving, camping, living in the bush, friends with everyone he met (maybe not Peter Garrett or Jenny Macklin), sitting on Bronwyn Bishop’s lap and asking her if she wanted to make babies (I will never get that out of my head!), driving major negotiations, Jabiluka, Century Zinc, telling the young Marandoo Yanner, a leader in the author’s own country at the bottom of the Gulf, that you don’t say you have sovereignty, you’re not given sovereignty, you take sovereignty, the sovereignty is yours and has 60,000 years of history.

see also:
My post, Tracker Tilmouth on … (here)
Lisa at ANZLL’s ‘thoughts’ (here) but – sorry Lisa! – don’t stop after 250 pages. This is a fascinating book from beginning to end. Not just the ‘life’; not just the format, story telling, which Wright has contributors discuss in the last hundred pages; but the knowledge of what worked and what didn’t, why so much of what we nice, liberal whites do is wasted, mired in bureaucracy, or runs headlong into racist government (every NT government) and dickheads like Malcolm ‘take your Statement from the Heart and shove it’ Turnbull; and whatever else you read, read p.499 on the community running Ali Curung Horticulture who kept the minutes of their meetings as an enormous ever-growing dreamtime mural.