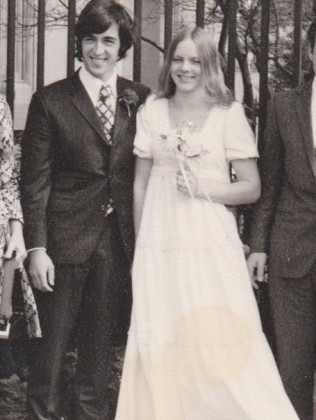 A week or so ago Sue at Whispering Gums reviewed Reading Victoria’s Suburbs & Pieces page, “a new piece of writing each week, free and online, themed around a suburb or town in Victoria. From fiction to nonfiction, poetry to prose, the only constant was the titles.” (I’ll link you to Sue (here) and you can follow her links to Reading Victoria). Despite the 25 years I’ve lived in the West, my heart still lives in Victoria where I was born, grew up and raised a family. Bungaree is not one of the 20 or so Victorian places I lived in but it played a short, significant part in my life (and I in its!).

Bungaree is of course the name of a prominent Indigenous man, of the Kuringgai people north of Sydney, during the early days of white settlement. It is also the name of a farming hamlet, south of Ballarat on the old Western Highway, long since bypassed, green, damp, hilly, black-soil potato country.

In the early hours of March 27 – mum’s birthday as it happens – 1976, I was at the wheel of a Brown & Mitchell Kenworth, a big red truck towing a big red pantec trailer loaded with 20 tons of bagged gypsum from Adelaide to Melbourne. My brother B3, a young policeman, was with me because, well because he could be. Any chance to drive. We’d called in at Stawell caravan park before midnight, found the Young Bride out, with friends at the Glenorchy football club ball, in the long cream dress she got married in still seeing occasional service as an evening gown, so we pressed on.

Misty rain was falling as we crested the rise into Bungaree then dropped down into the long right-hander through the scattering of houses. A car was coming towards us, lights on high beam. I aimed to the left of it, backing off, unable to judge the sweep of the corner in the dark and the rain and the blinding light. The crunching of gravel told me I was off the bitumen and on to the shoulder. And still the car was directly in front. I pulled as hard as possible to the right. Crashed into, over the car, swerved out across the wide verge, skating on wet grass, steering, braking furiously, around a power pole, through the front verandah of a weatherboard house, the Bungaree Police Station and into the front room.

Where there were five people sleeping on mattresses, an old man, his son, and three children.

In the pitch dark the truck engine roared. The man trapped under the left front wheel screamed. Someone, the policeman came running from the back of the house, shouted at him to shut up, he did, at me to stop the noise, I tried. Forced my arm under the windscreen lying flat on the dash, to the key, which did not work. Shoved the truck into gear and stalled the engine. For a moment all was quiet. B3 said “I’m ok, are you ok?” (At some stage he also said “Happy birthday, Mum”, but now I don’t remember when) and, his door up against an interior wall, crawled out through the sleeper cab, around the roofing iron separating us from my left ear to his right ear and we both got out my side, over the old man quiet beside the right hand steer.

At that stage we didn’t know about the three kids. One was rolled up in a mattress, in the stumps of the house, under the front of the truck, one had run away out the back, and I guess the third one we missed. Anyway they were all ok, though you can only imagine their nightmares.

B3 and I left the policeman to his family and ran out onto the road, to the car. It was crushed all down the left side, knocked off the road into the table drain. The driver told us to leave him alone, let him sleep. He was young, coming home from a party, had just dropped off his girlfriend, and driving home to Ballarat, had pulled up on the road, on the wrong side, had fallen asleep, lights blazing.

Within minutes, as you can imagine, there were police everywhere. The car driver was taken to hospital where doctors, on strike about something, managed to not give him a blood alcohol test. B3 was taken to hospital to have his head stitched. At this point I discover I don’t know how he got home. The old man was taken to hospital where he died the next day of heart failure. Rescuers jacked the truck off the ankle of the trapped man and he was taken to hospital. I sat in the back of a police car, was questioned then left alone. Later, the depot manager from Adelaide on his way to Melbourne, had his worst fears realised when he saw the ‘B&M’ on the sides of the trailer sticking out of the wrecked house. He came over to where I was sitting. “Are you ok?” I was ok. “All right, stay here, you’re in charge.” And off he went.

Some time after daybreak we all went back to the Ballarat police station. I sat in the canteen. When a load of stuff from Bungaree was brought in I joined the policemen putting it in storage. But mostly I just sat. It was lunchtime before Don my mate came down from Stawell in his powder blue GT Falcon to collect me, bringing Laverne, his girlfriend, and YB.

We went down to Bungaree for a look then headed off home. “Are you ok?” YB asked. “Yeah sure.” “Today was the day I was going to tell you we’re breaking up,” she said. 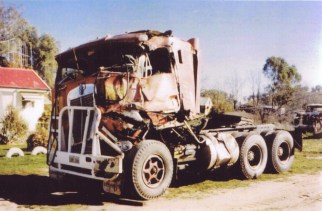 Not my photo. It’s been on the net for ages and I’m pretty sure it’s my truck. At the coroner’s enquiry we were told that hitting the car had destroyed my steering, severed the airlines to my brakes and pushed the left front wheel back into the battery box. So I had no lights, no steering, no brakes and all my desperate maneuvers to avoid the power pole, to miss the house were illusory, without effect, without the possibility of effect. At a subsequent court case the car driver had his licence suspended and received a small fine.

Recently I discovered that school students had written an account of the accident (here). There are differences between my account and theirs. There were differences between my account and B3’s at the inquest. I have told the story as I have remembered it, or as I have remembered retelling it. I’m with Murnane, we don’t remember events, all we remember is memories.