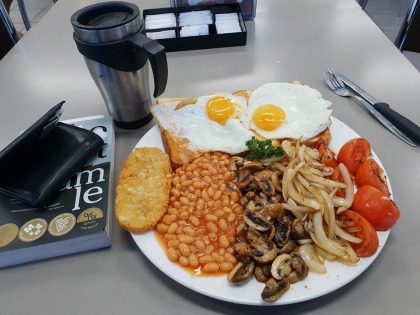 It’s hard being vego. Hard to get something to eat in roadhouses anyway, so mostly I avoid them or make do with a snack when I stop to fuel up – spinach and ricotta roll, toasted cheese, tomato and onion sandwich, spring rolls, wedges and sour cream. But BP truckstops have a standard menu item called “All day big breakfast”, $14.90, which includes bacon and sausages. So when I’m sick of making my own porridge I’ll order “All day big breakfast, no meat”. The usual response is, well, what would you like instead. Wingfield (Adelaide) a few weeks ago added fried capsicum and spinach, and the lady at Laverton (Melbourne) last week added fried onions and asked me to “put it up on Facebook* because it’s my last day”. I did, and all my friends told me what a pig I was.

Being vego is on my mind because the Tax Office has decided I’m no longer entitled to a living away from home allowance, on the grounds that I make up my meals before I leave home. $93 a night times 200+ nights away is a lot of money. Of course tax officials and politicians get $150-$200/night no questions asked, stay with family and use the money to buy investment properties.

Crossing the Nullarbor there are roadhouses every couple of hours, though it’s years since I’ve been in one, and zero IGAs, not that they open on the weekend when I’m travelling. So apparently the government will support you if you’re happy to live on processed and fried foods, but not otherwise. I always thought the allowance was like a remote areas allowance, for hardship, but apparently not. It’s a pity the ATO didn’t police transfer pricing and tax havens with the same zeal it applies to small business and welfare recipients.

The state governments do their bit with state protection rackets (“quarantine” stations) which confiscate any fruit and veg you are carrying at the state border (WA) and beginning of the wheat belt (SA) despite the fact that truck drivers and caravaners can go on for hundreds or even thousands of kilometres without going near any of the orchards supposedly being protected.

Enough. The business took a big step forward last month, with the purchase of two trailers, a B Double set. Theoretically, I’m now independent. Practically, for the time being at least, I will continue to carry freight for Sam and Dragan. But as we speak, business cards and con. note books are being printed. Next step will be to get the trailers in my own colours (light blue and white, this is as much fun as being one of Gerald Murnane’s racehorse owners). Better start saving.

Out on the Nullarbor at the weekend I was listening to a Napoleon Bonaparte mystery set on the Nullarbor – Man of Two Tribes. Written in the 1950s, it’s probably one of Upfield’s last. Certainly it shows signs of a concept stretched too far. The premise is that murderers who have been released before the completion of their sentence are captured by vigilantes and imprisoned indefinitely  in a limestone cave on the northern edge of the Nullarbor Plain. Detective Inspector Bonaparte, who identifies as part-Aboriginal, comes out from Queensland on the train to find a woman missing off the train a few weeks earlier. He obtains two camels, a dog, and a dead dogger’s diary and heads off into some really desolate country north of the rail line (and way north of the highway), where he is surprised by three Aboriginal men and imprisoned along with the murderers.

Upfield was of course not Aboriginal, but his protagonist is portrayed sympathetically and to the limits of what was then known. Part of the solution to the mystery revolves around Aboriginal ‘medicine men’ being able to communicate telepathically, which is a step too far for me. And although he was very well travelled and did lots of research, I think some of his background is wrong, both about Western Desert people and about the Plain – which he describes as totally flat for hundreds of kilometres and bordered by high cliffs, an ancient sea shore. But then, I haven’t been there. Yet!

*The Facebook account attached to this blog is Wad Holloway, but I have another, older account for pictures of grandchildren and trucks, maybe in that order.

27 thoughts on “Being Vego”