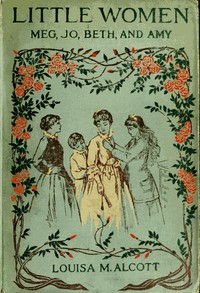 You guys all grew up reading Little Women I’m sure. Milly did, and Gee says that she and Psyche did, though I don’t remember giving it to them, but I didn’t. No sisters, no copy in the house. So I read/listened to it for the first time just a week or so ago and thought the first sentence of my review was going to be “I couldn’t find a way into reviewing this book which you all know by heart – no trucks!” BUT. In Part II, Chapter 23* a distressed Jo steps out into traffic without looking, into the path of a … truck. I pictured a costermonger’s barrow

though Websters suggests any “strong horse-drawn or automotive vehicle for hauling” so I’m not sure what Alcott intended.

*I wrote ‘2/23 truck’ on the back of my hand because that is my notebook when I am driving, but Ch 23 is actually in Part I, and now I can’t find the quote.

Louisa May Alcott (1832-1888) wrote Little Women in two parts, which came out in 1868 and 1869. It is generally regarded as fictionalised autobiography and as a novel for children. I’m sure most of you read it at around 12 or 13 but it seems to me to be directed more at young women getting ready for adulthood and marriage.

At the beginning of the novel Mr March, father of the little women of the title, is away at the American Civil War, as a chaplain (on the Union side) so the year is around 1862. Nathaniel Hawthorne’s The Scarlet Letter came out in 1850, Elizabeth Gaskell’s first, Mary Barton, was published in 1848, all of Jane Austen’s had been out for 30 or 40 years, but the two works which Alcott has Jo reading are The Vicar of Wakefield (secretly, for amusement, when she’s meant to be reading sermons to her wealthy, aged aunt) and Fanny Burney’s Evelina, both dating from the previous century. I wish just one author would write, “I rushed down to the bookshop for the latest xxx”, Dickens maybe, who was then at the height of his popularity. Of course the work which is central to Little Women is the older again Pilgrim’s Progress, John Bunyan (1678), another “first novel written in English” (here).

There is of course nothing I can tell you about the book itself. I found it a bit preachy but am used to that strain of Christian duty in books of that time; and I probably preferred Anne of Green Gables (1908, I hadn’t remembered it was so ‘recent’). I would though like to say a little about ‘the Independent Woman’. Jo speaks at length about the advantages of being unmarried and of course she famously refuses to marry the boy next door. Alcott herself remained unmarried, supporting herself as a governess and writer (her family’s connections with Thoreau, Emerson, the Underground Railroad are fascinating (wiki) and I would like to read more).

“An old maid, that’s what I’m to be. A literary spinster, with a pen for a spouse, a family of stories for children, and twenty years hence a morsel of fame, perhaps, when, like poor Johnson, I’m old and can’t enjoy it, solitary, and can’t share it, independent, and don’t need it. Well, I needn’t be a sour saint nor a selfish sinner, and, I dare say, old maids are very comfortable when they get used to it, but…” and there Jo sighed, as if the prospect was not inviting.

Americans, it seems to me, are afraid of independent women and even strong characters like Marge Simpson and Roseanne eventually bow down to their husbands, so I was disappointed but not surprised when Alcott not only married Jo off to the older Bhaer but made Bhaer, not Jo, the principal of Jo’s school. 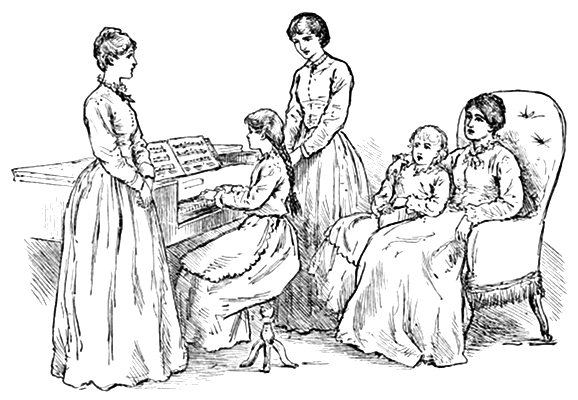 Project Gutenberg has a generously illustrated version (here). The illustration above is “At nine they stopped work and sung as usual”, by Frank T Merrill (here).

That’s a scrappy review, I know, but I wanted to say something about it. Now I am listening to Julian Barnes’ Flaubert’s Parrot which is a fiction about an amateur Flaubert biographer – really just an excuse for talking about Flaubert, and about what we can say about writers – which I am finding both interesting and enjoyable, and about which I might write a similarly scrappy review. If I get time. And there’s the rub. I’m stuck in Melbourne. Again. After only one day home in Perth. Here, mum is in hospital after a hip replacement (she’s quite well thank you, though tired). B3 is down to see after her and picks me up from the truckstop in Dandenong each day when it’s clear there’ll be no work, and drives me up to mum’s hospital (Knox).

Meanwhile, back in Perth it’s all happening. Kim (Reading Matters) has just come from London to live and work; Nathan Hobby has handed in his PhD thesis* and is now facing the world as “full-time parent, part-time writer, part-time librarian”; and Jess White is visiting us for the launch of Hearing Maud. Hopefully I will shortly catch up with them all.

*Nathan Hobby: 100 word version of my thesis, sounding more scholarly than it is in reality: ‘Astir With Great Things’ is a biography of the early life to 1919 of Katharine Susannah Prichard (1883-1969), an Australian writer and political activist. Critically engaging with Prichard’s autobiography, Child of the Hurricane, the thesis builds a fuller account of her early life with archival material. The thesis narrates Prichard’s literary development and the writing of The Pioneers and Black Opal. Exploring Prichard’s political radicalisation against the backdrop of World War One, the thesis also considers the intertwining of Prichard’s personal life with writing and politics, including the effects of her father’s suicide and her brother’s death in the war.