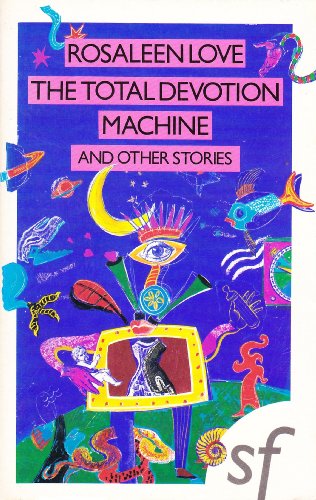 Have you heard of Rosaleen Love. I’m blowed if I have, but she’s a good writer, an old fashioned womens libber (b.1940), and funny! If the stars had aligned she may even have been my tutor in History and Philosophy of Science at Melbourne Uni in 1970 when I was in my third first year and she was doing her PhD. Love is a science journalist, writing on the Great Barrier reef, a futurist, and a Science Fiction writer. The Total Devotion Machine and other stories (1989) was her first collection followed by Evolution Annie and other stories (1993).

I’ve been reading, and enjoying, these stories over the past two or three weeks, but let’s go back to the beginning, for a close look at The Total Devotion Machine, followed by a brief look at the others – there are 17 in total averaging 10 pages each.

Mary Beth left it until the day before she set sail to tell Wim Morris and Baby about the Total Devotion Machine. “This time tomorrow I’ll be off, flying the solar wind to Mars,” she said …

Wim is an adolescent. He and Baby have absent fathers who are bound by shared parenting agreements.

So Mary Beth sailed off on the Tricentennial Fleet, and even the fathers came to wave goodbye, which set back their self-improvement schedules at least an hour.

The tone is one of old-fashioned SF optimism, but intended ironically I think, as are her observations not just of the fathers, but of Mary Beth. The TDM finds Mary Beth’s two kids a handful, and soon …

Baby comes to visit Jemmy [her father] at work. The machine bustles in and places her on his bench. “I thought that since you failed to turn up for your contractual three hours’ parenting time on Sunday I’d take time off in lieu today,” it says.

“The contract you signed with Mary Beth, whom I am legally and morally replacing.”

“Oh, that contract. Well that contract was always more of an ongoing process, really, more than a legally binding document as such,” says Jemmy, looking round the room at people who hastily drop fascinated eyes to their work as his gaze meets theirs.

… Jemmy knows that tomorrow, when Baby is back home, everyone will down tools and invite him into a conference. They will discuss, in a mutually supportive and deeply understanding fashion, Jemmy’s domestic problems and possible solutions to them, as part of The Strategic Management Plan for the Better Utilisation of the Full Potential of each Employee.

William, Wim’s father cops the same. The two fathers give in and move back home and the TDM looks forward to a year of leisure.

In Bat Mania, Barbastella finds to her surprise she has reached that age where she is turning into an old bat, literally. She adjusts to her situation and gains revenge on a former workmate by investing the properties he’s hoping to sell with colonies of her fellows. She sets her ambitions higher, wishing to change the world: “Matriarchy is the power of the old bat.”

Tanami Drift is a story of knowledge workers forced inland by rising seawaters – a possibility that was taken more seriously in the 1980s than now, when it has actually begun – where children tailored to their parents requirements are purchased from a Baby Factory, and extended family networks are simulated by computer. It’s a complex story. Glory wants to know who supplied her genes; her ‘father’ is on a one-way flight to Jupiter; the community is under surveillance from metallic lizards; desert vegetation is kept under control, by fire, by ‘outstationers’ who have their children the old fashioned way; Dr Neville who runs the Baby Factory appears to be demented.

In other stories Love uses her knowledge of and love for marine biology. A research student loses credibility when she lets slip that she can actually feel what sea-life are thinking; two hippies and a maths nerd drive up the coast to commune with the dolphins but once the dolphins have learned math they will take over the world; fossilized bones from Lake Mungo subtly change their shape each time they’re measured, causing constant changes in theories about pre-history; a researcher into electric signals between fish discovers extra-terrestial messages.

There are stories that might be straight, but have a little twist at the end. Children Don’t Leave Home Any More, and mothers still pick up after them; the end of tea ladies and the contracting out of milk and coffee supply leads to mafia controlled bingo in the lunch room; heaven isn’t all it’s made out to be.

The final story is a report into the tourist possibilities of the Maralinga atom bomb test site in central Australia. It’s pretty dark, but then so was the ‘black mist’ of radioactive dust which enveloped workers at the site and Aboriginal communities left unwarned nearby. In some distant future, travellers will come to this planet and compare us with dinosaurs. ‘”Their brains were too small for their huge bodies”, they will say, nodding wisely to each other.’