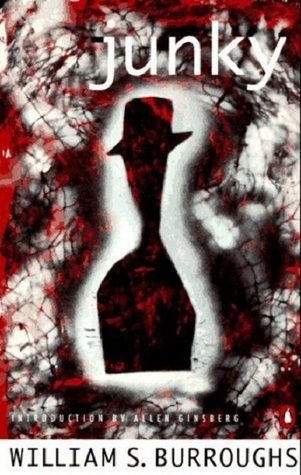 William Burroughs (1914-1997) has been one of my favourite writers since university days – half a century ago now – and I have a row of his books, The Naked Lunch, The Soft Machine, The Ticket that Exploded, Nova Express … maybe 7 or 8 of the 18 he wrote. Though it’s a long time since I read any of them. It’s hard to say what the appeal is, what the appeal is of Beat/Punk/Grunge writing generally. It must be something to do with life being lived at the rawest level. With writing to match. I haven’t studied much modern literature but I can see a lineage stretching back through Anaïs Nin, Henry Miller, DH Lawrence and James Joyce (and no doubt Virginia Woolfe, but I haven’t read enough to say).

Junky which I came across recently in a second-hand shop was Burroughs’ first. He was relatively old when it came out, nearly 40, and half a generation older than Ginsberg (1926-1997) and Kerouac (1922-1969), the other principal members of the Beat Generation, who had famously got together at New York City’s Columbia University in 1944.

Ginsberg writes in the Introduction that by the 50s he and Burroughs were corresponding regularly. Burroughs began including chapters of Junky and at one stage Ginsberg, who was living with his parents after a spell in a mental institution, was carting round to potential publishers both Junky and Kerouac’s Visions of Cody, which became On the Road, the Beat Generation’s seminal text.

By chance, my companion from NY State Psychiatric Institute, Carl Solomon, was given a job by his uncle, Mr AA Wyn of Ace Books… He distrusted the vagabond romanticism of Burroughs & Kerouac

and then there was the dread Narcotics Bureau which was rumoured to make arrests even for the discussion of drug taking – at a time when some states were making ‘being a drug addict’ a jailable offence, as Burroughs discusses in this book – but finally Junky (or Junkie) came out, hedged about with medical disclaimers and a Preface explaining Burroughs’ “distinguished family background”, which I presume is the Prologue with which this edition begins:

I was born in 1914 in a solid, three-story, brick house in a large Midwest city … I remember the lamp-lighter lighting the gas streetlights and the huge, black, shiny Lincoln and drives in the park on Sunday.

Junky is the story of ten years in ‘William Lee’s’ life, or rather the story of ten years of taking drugs, of being a heroin addict. His children, his wife are barely mentioned. Of his encounters with boys, with which others of his works are saturated, we see very little. Partly maybe because H he says, destroys the sex drive, and partly because he wished this to be purely an account of drug addiction. To the best of his ability, the protagonist of this work is Junk.

It is possible to detatch yourself from most pain – injury to teeth, eyes, and genitals present special difficulties – so that the pain is experienced as neutral excitation. From junk sickness there seems to be no escape. Junk sickness is the reverse side of junk kick. The kick of junk is that you have to have it. Junkies run on junk time and junk metabolism. They are subject to junk climate. They are warmed and chilled by junk. The kick of junk is living under junk conditions. You cannot escape from junk sickness any more than you can escape from junk kick after a shot.

This is the tone throughout. We are all familiar with the exaggerations of American comedians acting drunk, with the unreadable prose hippies use to render ‘being high’, but Burrough’s approach is the opposite. Junky is a straightforward, unadorned account of the everyday experience of being controlled by the desire for junk.

I have learned the junk equation. Junk is not, like alcohol or weed, a means to increased enjoyment of life. Junk is not a kick. It is a way of life.

Is there a story? Sort of. Burroughs finished school, studied Eng.Lit., bummed around Europe during the Depression, living off his trust fund. He’s called up when the US enters WWII but “cops out on his nut-house record”. And about this time he’s introduced to drugs and the story begins. From the beginning he is involved in fencing stolen goods and dealing. Later, he turns to rolling sleeping drunks and stealing their wallets. He does not say if his trust monies ran out or if his family attempt to ‘recover’ him. He does not mention meeting a wife, but there she is, late in the book, their house being searched and them both being arrested.

He goes on junk, mixes with fellow addicts and low level dealers, learns the strategies for survival, in downtown New York, in New Orleans, briefly in a farming community in Texas where he owns property, and then, escaping while on bail, Mexico. Endures weeks of junk sickness to come off junk. Goes back on. Repeat. Repeat. By the end, the US has replaced one Prohibition with another which will morph in our time into The War on Drugs. Returning home seems out of the question. William Lee considers moving on to the South American drug yage which may facilitate telepathy.

In a moment of synchronicity this came up in a Grab the Lapels comment stream just as I was wrapping up. “… one of the lead scholars on Burroughs’s work; he is also a quirky dude named Davis Schneiderman.”
http://www.davisschneiderman.com/scholarship/