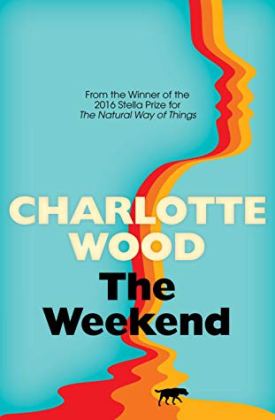 The Weekend is a novel about three 70ish women cleaning the beach house of their dead friend. And the thing is, I’m within 2 or 3 years of their age and Charlotte Wood (1965-  and looks younger on Facebook) isn’t. Wood no doubt has all or some of mother, mothers-in-law, aunts, friends, colleagues to draw on, and I’m sure she gets women, but I don’t think she gets 70, an opinion I also had about another much lauded novel, Extinctions by Josephine Wilson.

On the other hand, towards the end one of the characters muses:

People thought when you got old you wanted your lost youth, or lost love, or men or sex. But really you wanted work and you wanted money.

Well, she got that right!

I loved The Natural Way of Things and I was ready to love The Weekend, but that’s not the way it has worked out. Wood has a clear, not particularly literary, style of writing which suited TNWoT, with its compelling story line of young women in indefinite detention for being the victims of men they trusted. The Weekend is the story of just three women, at the other end of their adult lives – or so Wood would have us believe though I personally am looking forward, like my parents and grandparents, to a couple more decades of activity – but again without men at this time, and having been with men they should not have trusted as much as they did. It’s a smaller story which needed better writing and character development to carry it off.

The protagonists are Wendy, a public intellectual, Jude, a retired restaurant manager, and Adele, an actress. They all live in Sydney, and the novel opens with them making their separate ways to the fictional community of Bittoes on the Central Coast (the rocky and spectacularly beautiful coast between Sydney and Newcastle, 160 kms north), where their lately deceased long time friend Sylvie had a beach house, which they had often used together and separately, and which they have been asked by Sylvie’s partner, now safely home in Dublin, to clean up for sale.

Wendy lives comfortably off the sales of her erudite books, and plans to write more. She is overweight, and a bit stereotypically, is sloppy in her person and in her housekeeping. She has an old car, which breaks down on the way to Bittoes, and in which she is trapped while “road trains” roar past, while her old dog pisses on her lap. Wendy, now a widow, had been in a loving marriage for many years, and has two children, by an earlier marriage, who appear to blame her for something.

Jude is uptight and bossy and has been the mistress for 40 years of a banker whose principal relationships are with his wife and children and grandchildren. She has no presence other than as a storm cloud around which the others navigate.

Adele, is small with a good body, is still amazingly supple, hasn’t been offered a part for more than a year, is or was in a relationship with another woman, and is also stereotypical in her narcissism and dependence on others.

She would wear black, very simple – or no, charcoal. With some stylish sleeve detail, but fitted so that you could see her figure, which was still really very lovely. People said that to Adele often. You have a lovely figure. Which meant, you have terrific tits. For your age.

I think the author’s intention was to explore the notion of friendship, not a subject to which I have given a great deal of either thought or practice.

The thirties were the age you fell most dangerously in love, Adele had discovered, after the fact. Not with a man or a woman, but with your friends. Lovers back then came and went like the weather … No, it wasn’t lovers but friends – these courageous, shining people – you pursued, romanced with dinners and gifts and weekends away. It was so long ago. Forty years!

Wood appears to confusing my generation with hers. Baby boomers were too busy, and too poor, in their thirties, with partners and children, to be “romancing” friends.

Anyway, the three women spend the long weekend over Christmas, cleaning, or not cleaning, reviewing their lives, being bossed about by Jude, bickering, and briefly, relaxing on the beach. Adele bumps into a rival, more successful older actress at a restaurant and invites her and her 40 ish producer partner to dinner. Where everything comes to a head, including the weather (Wood shows some restraint, and doesn’t throw in a bushfire).

The air was all electricity. They were suspended, Wendy pinned on the couch, Jude and Adele each separate, adrift. None could reach the other. The door was still open and the rain swept in; darkness had swallowed up the room.

Nothing is resolved, the dog doesn’t die. Wendy feels vaguely she must do something to find out what it is that so bothers her children about their upbringing. Adele has no visible means of support for the coming year. Jude we don’t know enough about to care. The late Sylvie, whose absence might have been expected to be the centre of the novel, barley makes a showing. The friendship, having lasted this long only through inertia, would seem to have nowhere to go.

37 thoughts on “The Weekend, Charlotte Wood”