Skip to content
HomeTirra Lirra by the River, Jessica Anderson 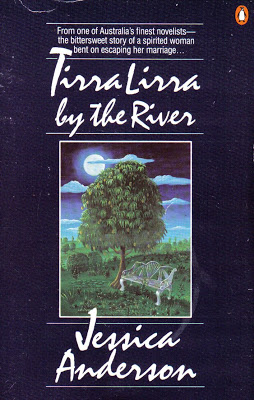 I’ll tell you a secret. All the time I was reading this, I thought I was reading a Thea Astley. And it was only when I got to the end and idly looked at some biographical details that I discovered I wasn’t. I don’t have any excuse, Jessica Anderson’s name is there plain as day as they say, on the cover, but I had no reason (I thought) to look at it.

Astley (1925-2004) and Anderson (1916-2010) are of the same generation; both from Queensland; both moved to Sydney, and both continued, I think, to write about Queensland. I was mildly surprised as I was reading by the gentle subject matter – an old woman reflects on her life; when I was expecting something much more savagely political, like A Kindness Cup for example.

The old woman, Nora, is older than the author – no, I’m not revisiting the path I took last week with The Weekend – and I got the impression her age was about the same as the year, ie. that she was born around 1900, in a typical ‘queenslander’ weatherboard house, on stilts, 14 steps up from the ground, in one of Brisbane’s many riverside residential suburbs. Her father, whom she does not remember, dies when she is six and she lives with her mother, older sister, Grace, and brother, until he is killed in the trenches in France (which my grandfather, another Brisbane boy survived) along with Grace’s young man, and most of the neighbourhood boys.

Nora’s life has four distinct phases: growing up in Brisbane, bursting with sexual tension but no sex; a childless marriage in Sydney, where she and her husband find a flat with the bohemians on Potts Point until he is able to move them into his mother’s house in the suburbs to see out the Depression; divorce, a shipboard romance with a married man, an abortion, the end of sex, years in London sharing a house with two other women and the landlord; and the return in old age to the empty family home in Brisbane, Grace having married late but now dead.

Nora’s recollections are partly her own, partly the result of being cared for on her return by a couple who had always lived nearby and so had known her and her sister since childhood, and partly recollections of stories she had told her housemates in London. In fact, she had so often told and laughed over the stories of her unsuccessful marriage to Colin Porteous, that “Perhaps the real man has been so overscored by laughter that he will never be retrieved”.

Anderson was adamant that Tirra Lirra was not biographical, though the bohemians and old houses on Potts Point were drawn from life. There is one other character in the novel and that is Olive Partridge, Nora’s schoolfriend who becomes an author. The two meet up in London before the (Second) War, and Olive goes on to Austria. I was wondering as I read if Olive contained aspects of the author, thinking Astley, or of a friend, but no one springs to mind. Anderson herself was in London in 1937, but I don’t recall her being mentioned by other Australian authors in London between the Wars and in any case it was only in the 1960s, in her forties, that Anderson had the freedom to begin working on novels.

This is a slight novel, 141pp, and in fact began as a 20,000 word novella which publishers persuaded her to expand. It’s theme is Nora’s frustration, sexually, artistically.

One moonlit night, coming home across the paddocks from Olive Partridge’s house, I threw down my music case, dropped to the ground … I unbuttoned my blouse, unlaced my bodice, and rolled over and over in the sweet grass. I lay on my back and looked first at the moon, then down my cheeks at the peaks of my breasts…. I must have been less than sixteen.

… though I was quite aware of the sexual nature of the incident I don’t believe I was looking for a lover. Or not only for a lover… If that sounds laughable, do consider that this was a long time ago, and that I was a backward and innocent girl, living in a backward and unworldly place. And consider, too, that the very repression of sex, though it produced so much that was warped and ugly and cruel, let loose for some natures, briefly, a luminosity, a glow, that I expect is unimaginable now.

Later, we discover that Nora’s only other ‘sexual’ experience is with a boy a few years younger, who “teases” her, whom she allows to tease, when they are left alone, by jumping out at and grabbing/caressing her. It is some years before she marries, and when she finally becomes comfortable with sex her husband tells her to lie still and not carry on like a harlot. Sinking into depression in her mother in law’s house, not permitted to work, Nora is only saved by Porteous offering divorce and a small settlement. After that there is just the one shipboard romance, and then nothing.

In parallel, Nora sublimates her artistic talents in embroidery and later in dressmaking, and only on reflection sees what she might have achieved.

This is an interesting work to bear the ‘Independent Woman’ tag because Nora’s suppressed sexuality is not so different from Miles Franklin’s Sybyllas, Sybyl, Ignez et al*. Young Nora feels the rising sap, as they did. MF’s women flirt but hold themselves back from contact. Nora falls into marriage and finds it horrible. MF, I think, would feel vindicated.

Jessica Anderson, Tirra Lirra by the River, Macmillan, Melbourne, 1978 (my edition is the later Penguin, with the cover above)

*The Sybyllas are from My Brilliant Career and My Career Goes Bung, Sybyl from On Dearborn Street, and Ignez from Cockatoos (all here).

24 thoughts on “Tirra Lirra by the River, Jessica Anderson”