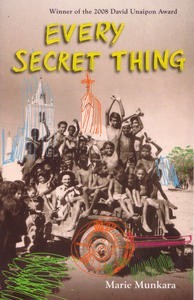 If ever you felt complacent about our decision as whites to live in this country, then read Munkara, who sweeps complacency away by telling familiar stories about ‘good’ settlers and shiftless Blacks from the Black point of view.

Yes we’re here now, but every decision we’ve made – from the early days, during all the Stolen Generations years, through the 1950s and 60s, when I think this linked collection of stories is set, right up to today with the Intervention, the ongoing denial of proper Land Rights, systemic racism in the Police Forces, the diversion of ‘Aboriginal’ monies to bureaucracy and white businesses, policies deliberately aimed at making it impossible for Indigenous communities to be maintained on Country – serves our interests and harms theirs.

Marie Munkara is of Rembarranga, Tiwi and Chinese descent. Born in central Arnhem Land she was sent to Nguiu on the Tiwi Islands at about eighteen months, then down south by Catholic missionaries when she was three. She now lives in Darwin, where she is doing a PhD. Every Secret Thing (2009), which is about a presumably fictional Catholic mission in Arnhem Land, was her first novel.

Munkara doesn’t appear to give out her age, and I haven’t yet read her biographical Of Ashes and Rivers that Run to the Sea (2016). But it would be sad if she were the Marigold in these stories, stolen from loving parents, sent away as a baby to be bought up Catholic and trained for service, constantly beaten and raped by her employers, who finally returns to her family only to find she doesn’t fit in.

Over a series of linked and sequential stories we become familiar with the ‘Mission Mob’, the Catholic priests and nuns bringing civilisation and Christianity to ignorant savages; and the Bush Mob, the Indigenous Arnhem Land community who after millennia of relaxed, well fed lives, must be brought to eat flour and sugar instead of fresh meat and bush tucker, to wear clothes in the tropics, and of course to accept the Catholics’ strange pantheon of saints, virgins, spirits and gods instead of their own.

In an allegory for white settlement everywhere, over the lifetime of one generation, the Bush Mob goes from self-sufficiency to despair, disease and dependence. In the end, Pwomiga, one of the senior men, paints himself white and commits suicide to prove there is no life after death –

So began the slow downwards spiral of despair. It wasn’t long before Jerrengkerritirti with his unruly teeth joined Pwomiga because he didn’t want to be in that place any more. And young Seth not long after that. Then the grog came and the winding path of good intentions became a straight bitumen four-laned highway that led even deeper into a world of self-destruction and hopelessness that no-one knew how to fix.

But don’t get me wrong, this is at times a laugh out loud funny book. Munkara is at a loss to explain how these idiots, the Mission Mob, can plonk themselves down in the midst of a happy community, their assertions of superiority accepted or at least tolerated, using their authority to make everyone miserable. But she shows over and over just how ridiculous, how hypocritical they are.

Throughout, there is a surfeit of often good natured sex. The young men and women are at it all the time, two sisters seduce a priest, the priests put the hard word word on the nuns, priests of course take what they want, from girls and from boys, two boys wear their mothers’ dresses and take it wherever they can get it, there is an epidemic of overeating evidenced by the swelling of young womens’ tummies.

In a central series of stories, Caleb seeks a wife. A couple in a nearby mob have an unruly daughter, Juta, pregnant to the boss’s daughter’s fiance. Caleb marries Juta and his family adore their light skinned daughter, Tapalinga.

The mission have responded to the rash of mixed race births by seizing all the babies and sending them to an island mission, the Garden of Eden, to be ‘educated’. Tapalinga, too is taken, reappearing some years later as Marigold, in service since she was seven, flogged and unpaid, “lucky to have the boss fuck her because she was a diseased piece of rubbish that no-one else would want”. The Bishop had told her her mother was “on the streets” and couldn’t support her, but another girl recognizes her and tells her how to find her family. That girl falls into prostitution and dies but Marigold makes her way home only to find that Juta has closed that part of heart to cauterise the pain.

Munkara brings up one or two characters at a time and tells a funny story about them, until you feel you know them all well. But all the time, the Bush Mob is declining, accepting cast off clothes, surrendering their kids to the mission, giving up old ways. It’s a funny book and a sad book, but above all, an essential book.

see also:
My review of Munkara’s A Most Peculiar Act (here)

On Monday (19/11/2019) Jess White wrote that her work on the Wardandi Massacre (my review) has been included in the updated ‘Colonial Frontier Massacres in Australia 1788-1930’ map (here). Research for the map “reveals that at least around 8400 people were killed during 311 massacres that took place between 1788 and 1930. About 97 per cent of those killed were First Nations men, women and children. Stage 3 of the digital map project added 41 massacre sites in WA and 9 more in the NT.”