With #AusReadingMonth drawing to a close, I still have Tas and Free to go on Brona’s Bingo card, so I have made the practical decision to knock off Free first, because the book, pamphlet really, I have chosen is much shorter, 50pp. I may still get Bruny read and written up in time, I’m having a break, doing grandfather duty while daughter, Gee is overseas at a conference.

Lake Condah is in western Victoria (map), about 300 km west of Melbourne and I think the mission is more or less contiguous with Budj Bim National Park, formerly Mt Eccles, one of the many extinct volcanoes in the Western District. For three years in the 1960s Dad was headmaster and we lived in the schoolhouse at Macarthur nearby, in the Anglican parish of Condah. The vicar’s house was in Condah and I was an altar boy but I don’t remember ever going there, not even on our routine ‘Sunday drives’ (much more fun to go to the beach at Yambuk or Port Fairy).

The mission closed in 1918. Some Aboriginal people remained in the area, though I have written before that I was completely unaware of them. I was in the scouts, as was a boy known universally as Darky, but … no, I didn’t make the connection. We had a lot of freedom and three or four of us would routinely go away camping for the weekend, without leaders, often at Mt Eccles which has a “bottomless” lake in its crater, completely surrounded by steep cliffs, and a big cave and some smaller caves which we would explore (which still gives me nightmares). 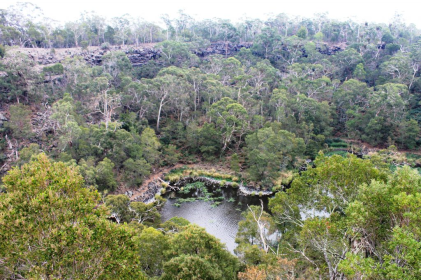 Checking Wikipedia I discover that Budj Bim was active up to 8,000 years ago, overlapping Aboriginal occupation by at least 30,000 years.

So, to the book, which Dr Keith Cole, a teacher and researcher in this area*, self-published in 1984:

[Anthropologists] estimate that when white people arrived, about 300,000 Aborigines were living on the continent, of whom between 11,000 and 15,000 were located in what is now Victoria. These Victorian Aborigines were divided into thirty-eight tribes of varying sizes. The Lake Condah Aborigines, known as the Gournditch-jmara (frequently spelt Gunditjmara), were part of a much larger group whose language and people were known as Manmeet.

By 1886 [that is, within 100 years] the number of full-blood Aborigines living in Victoria had fallen to 806 … This dramatic decline in numbers was the result of killing and poisoning by white people, the diseases which they introduced, coupled with the consequent trauma and alcoholism of a dispossessed people.

Manmeet does not appear to be a name that is currently in use, but I assume it coincides with the large area of western and central Victoria in this map of the main Aboriginal language groups  (for more information about the map, see my Aboriginal Australia page)

Gunditjmara is still very much in use for the people of Victoria’s west coast, with their language being known as Dhauwurd wurrung (here).

In 1841, Chief Protector of Aborigines George Augustus Robinson reported, regarding a swamp to the north of Gunditjmara country,

an immense piece of ground trenched and banked, resembling the work of civilized man but which on inspection I found to be the work of the Aboriginal natives, purposefully constructed for catching eels.

Robinson estimated that the system of channels measured “some thousands of yards” (2km) in length and covered an area of “at least 15 acres” (six hectares). Of course, this did not fit the narrative of Aborigines as stone age hunter gatherers and was ignored for another 135 years (The Conversation, 8 Feb 2017 here. The Age, 22 May 2019, World Heritage listing here).

I also looked in Bonwick’s Western Victoria: The narrative of an educational tour in 1857, but could see no reference to Condah, though some to the murder of Aborigines (I guess that means another book to be reviewed).

The Aborigines of Western Victoria were different from those living elsewhere in Australia in several ways. In the first place they built permanent huts made of wood and stone with roofs of turf and branches… In the second place [they] constructed stone races, canals and traps with woven fibre nets to catch eels and fish… Stone walls, huts and cairns built near these fish traps are dated about BP 8,000.

From settlement in 1834 up to 1851 Victoria’s white population grew to 80,000 (plus 1.4 million sheep and 100,000 head of cattle). Within another five years the goldrushes had blown that out further to 300,000. The Aborigines did not give up without a fight but they were basically wiped out. Protectors were tried, unsuccessfully, from 1838-50, and then Missions. Lake Condah Mission was started in 1867, after a failed attempt to get the Gunditjmara to live with their traditional enemies at Framlingham Mission (Warnambool).

The mission, run by the Church of England, soon had 20 or so 2 room timber huts for the 70-80 Aborigines, about half of whom were children, and bluestone buildings for the superintendent and teacher, and for the school which also served as a church.

The Aborigines … were allowed to hunt and fish one day of a week, but with permanent rations this was more of a pastime for them. Their formal ceremonial life had long gone, even before they came to the Mission.

The Aboriginal census of 1877 showed that only 45% of Aborigines in Victoria were living on Missions or stations, though 66% in the Western District, including 81 at Lake Condah, 69 at Framlingham, and 77 on stations – presumably farm workers and their families. The Western District at that time was broken up into enormous, and enormously profitable, properties, ‘stations’, of tens of thousands of acres, underpinning the wealth of the Victorian squattocracy well into the C20th.

In 1886, the Aborigines Protection Law Amendment Act was enacted, forcing all mixed race people off the missions. “They were now thrown into the midst of a highly critical and racist society and told to act as white people”, while the bank crashes and consequent depression of the 1890s made the prospect of employment effectively impossible. The government appropriated mission lands and refused to make available land for housing homeless and unemployed Aborigines, until 1910 when the Act was amended again to be less onerous. But in 1918 the Mission was closed and its remaining inhabitants transferred to Lake Tyers at the other end of the state.

Aboriginal families continued to live nearby and to use what remained of the Mission buildings as a community centre, until in the 1950s the (Bolte) government leased out all the remaining land for farming by soldier settlers.

At the time of writing (35 years ago), some restoration work had commenced under the aegis of Victoria’s 150th anniversary.

This is a well produced book with lots of photographs and maps. I wonder why Dr Cole self-published, but maybe he preferred to be in control.

* The bio reads: Dr Keith Cole has spent much of the past eighteen years doing research among the Aborigines of the Northern Territory and Victoria. He was founding Principal of Nungalinya College, Darwin, from 1973-1978. Dr Cole is the author of a number of historical and anthropological books about Aborigines.

Google brought up nothing except some similar books about Aborigines in the NT by Reverend Dr Keith Cole.
Keith Cole’s year of birth was 1919.