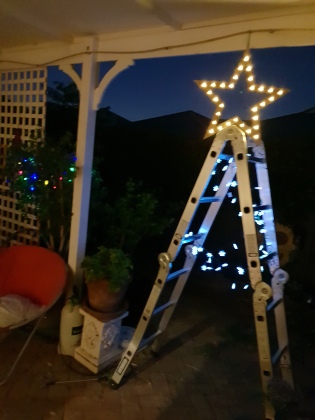 Happy (northern) Winter Solstice to you all, but “remember whose birthday it is” as they say – a bit like the Queen’s birthday, which is celebrated on every day but the real one. Perhaps in the future it will be Trump’s Birthday seeing as a significant portion of the GOP apparently see him as the new Jesus. Imagine the sermon on the mount beginning “and verily, I grabbed them by the pussy”.

You may remember the christmas tree ladder from last year. Apparently it is a tradition now. I’d better go round to Milly’s and get it out of the shed. She’s ‘it’ again, though the remote kids – in Darwin and Malawi – won’t be home this time. Still, there’ll be one daughter, grandkids, some of Shelley’s sisters, a boyfriend, a niece, the niece’s family, two dogs. We’ll do ok.

Hopefully Lou will send us some Christmas photos from his village in Malawi that I can share (that’s a hint Lou). Psyche’s photos from Darwin might scare the horses.

Now, without further ado, the wadholloway Best Blog Post for 2019 …

Well, a little bit of ado. During the year, from time to time I copy links to the draft for this post and at the end of the year, ie. this morning, I review them. So, in the sequence we are used to with other awards, here is the short list:

Brona’s Books, The Vindication of Accidental Feminists (here)
Melanie at Grab the Lapels, Is Grab the Lapels actually Feminist (here)
Emma at Book Around the Corner, A master class on how to talk about race (here)
Sue at Whispering Gums, a very clever Six Degrees (here)
Lisa at ANZLitLovers, The White Girl by Tony Birch (here)
Kim Kelly, On inappropriate use of the Holocaust (here)

It seems, WG’s amusing piece aside, I am very much into analysis this year, how we write about difference. I loved, and was impressed, reading them all again, but there can only be one winner and I’m going with… drum roll

Kim Kelly, On inappropriate use of the Holocaust. Congratulations!

My favourite post of my own, for the past year, was the most recent one, Moll Flanders. I think I’m finally getting a handle on the birth of the English novel.

Elsewhere on the internet, I haven’t read so much of Helen Razer as I’m used to, or as I would like. But she’s no longer with Crikey and I no longer seem to be getting Daily Review (it was in Junk for a while which I check insufficiently often). I still read and enjoy the analysis of Guy Rundle in Crikey but my new go-to political rag is the Palmer Report, a day by day, minute by minute account of the downward spiral of the criminal monster in the White House.

And thanks to cousin Kay, a librarian in Bendigo, who pointed me to this story, which may give us all hope: Turkish garbage collectors open library full of discarded books.

As usual, I read too few new releases to make any meaningful comment, in fact I may have read more from the C19th than I did from 2019. What do I remember? Bruny, The Weekend, Blakwork, because they were recent. Wintering. Gerald Murnane’s A Season on Earth was by a long way the standout, but of course was as usual with Murnane, ignored by our very middle-of-the-road awards judges. Of the books in my TBR I mentioned last year, I read only Solar Bones, which I loved. Bloodlines, One, Doing Life, Georgina Molloy, The Art of Time Travel are all still up there behind me, waiting, waiting.

I hope you all have books on hand for Australian Women Writers Gen 3 Week, 12-18 January 2020. I hope I do! Just to recap: the period we will cover is between the Wars, and the themes are Modernism, Social Realism, and, carrying over from Gen 2, the recognition of women’s role in Pioneering (farming) – which I have overlooked in previous posts – the ‘seminal’ work being Miles Franklin & Dymphna Cusack, Pioneers on Parade (1939).

Enjoy the holidays. I will, though I’ll be back at work early in January, if there is any work, the weeks up to Invasion Day are a quiet time for general freight. And good reading!