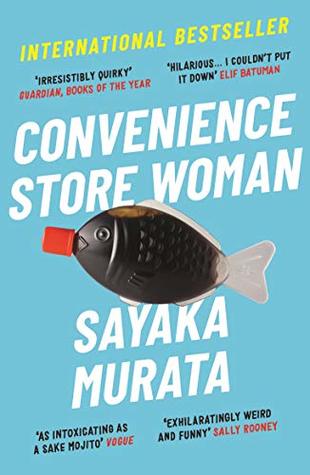 Convenience Store Woman made a bit of a sensation when the English translation was released a couple of years ago, and what was said about it was sufficiently intriguing that when I saw it in a bookshop the other day I promptly bought it. This is the story, told in the first person, of a woman, Keiko Furukura, who aspires to be ‘normal’, is never sure of the rules, but thinks that she has found a niche where she won’t be noticeable, working in a convenience store, for 18 years from when she was 18 years old.

I’m a bit dubious about writers using the voice of someone ‘on the spectrum’ to query the way unspoken rules govern social interaction, basically by showing us the ridiculousness of ‘working to rule’. But I think Murata has a serious purpose, and carries it out quite well. We of course have to decide whether what the author says about rules in her, Japanese society apply more generally. Clive James in his unlamented TV show mocked Japanese for being different, and it would be interesting to know how much self-mockery the author intended in her description of start-of-shift rituals, practising greetings and sales spiels (and yes, I’ve been a trainee Encyclopedia Britannica door-to-door salesman, and the rituals were not much different).

The novella, charts a month or so in Keiko’s life when she is made to realise that she is not as normal-seeming as she had thought. The catalyst for this realisation is a meeting of her girlfriends, and I must say the most unlikely aspect of this story was that Keiko kept up with her married school friends., and that they chose to keep up with her.

Keiko’s younger sister has given Keiko some stock responses to questions about why she is unmarried, why she continues after all these years in her student job as a part-time convenience store worker. She cites fragile health, but for once a friend’s husband calls bullshit

He stared at me as though I were some kind of alien. “What, you never …? I mean, if finding a job is so hard, then at least you should get married. Look, these days there are always things like online marriage sites, you know,” he spluttered….

The next thing I knew, just like that time in elementary school, they all turned their backs on me and started edging away, staring curiously at me over their shoulders as though contemplating some ghastly life form. Oh, I thought absently, I’ve become a foreign object.

Keiko loves the structured environment of the convenience store. There are rules, rules which she can see the purpose for, there’s a manual for heaven’s sake. She eats to be fit to work. Goes to bed early. Feels the rhythms of the store even when she’s away. She dreams the store. But if her friends had never accepted her ‘normalcy’ then she must try something new.

Her current store manager, store manager #8, has trouble retaining staff. He hires a misfit, Shiraha, a guy about Keiko’s age who should have been a salaryman years ago, who kicks against the rules, comes late, doesn’t restack the shelves with product in orderly rows, complains constantly

“Everyone here is a stupid loser. It’s the same in any convenience store. You’ll only find housewives who can’t get by on their husband’s salary, job-hoppers without plans for the future, and the crappiest students who can’t get better jobs like being a home tutor. Or foreigners who send money home. All losers.”

He wants a wife, a wife with money who will enable him to stay home and set up an on-line business. As is the way with all these jobs, he doesn’t get the sack, he’s just given zero hours. One night Keiko sees him hanging around outside the store and on the spur of the moment she proposes that he come home with her. Her sister, her parents, her friends, her workmates are ecstatic, Keiko is normal after all, she’s living with a guy.

In the one room apartment Keiko and Shiraha barely interact. He sleeps on a futon in the bath – so that they must use the public coin-operated shower – watches movies on his tablet, she feeds him boiled veg and rice. He never goes out and she is mostly at work. He wants her to get a real job. She quits the store!

At uni I studied existentialism, I read lots of Sartre, I regarded myself as a existentialist. Murata seems to me to be asking the question: if we act a role are we in bad faith? Sartre says yes. But I think Murata is saying that Keiko constantly questions the role that she knows she is playing, that is, she is in good faith. Convenience Store Woman starts slowly but quickly becomes a thoughtful, yes sometimes funny, but always rivetting read.

Kim at Reading Matters (here) enjoyed it too, for different reasons probably. Melanie at Grab The Lapels (here) was troubled by CSW and found Shiraha’s relationship with Keiko abusive. I think Keiko knowingly used Shiraha, but what would be the fun in always being in agreement.