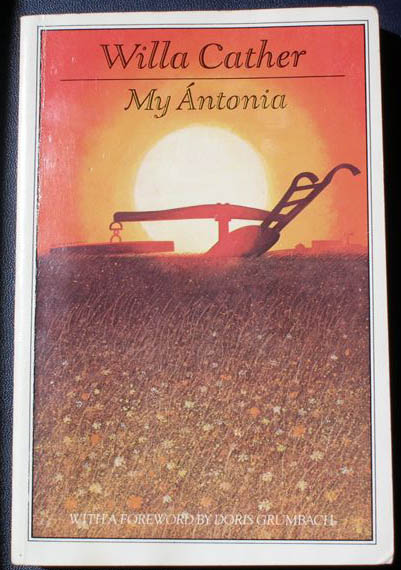 Well, I’ve read the three now and I’m clear The Song of the Lark is my favourite. Clear too that while they each cover the life of one strong woman, over the same period, 1880-1910, in more or less the same small part of America’s western prairies, they barely constitute a ‘trilogy’.

My Ántonia (1918) is ostensibly the story of Ántonia Shimerda, the daughter of a Bohemian family come to take up newly opened farmland near (fictional) Black Hawk, Nebraska, in the same uncultivated red grass prairie country as O Pioneers!, where Cather grew up. But this one is hardly a novel at all, nor even the story of Ántonia, but rather Cather’s autobiography very lightly fictionalised as the memoir of one of her schoolmates, Jim Burden.

As one blogger I came across wrote: “For a book about Ántonia, there was very little of Ántonia – not enough for me to build a picture of her personality.” She also wrote: Verdict: Ahem. Sorry. Boring. which is harsh, but not that far off the mark.

a Bohemian girl whom we had known long ago and whom both of us admired. More than any other person we remembered, this girl seemed to mean to us the country, the conditions, the whole adventure of our childhood.

Though in the end it is only Burden’s account we hear.

Encyclopaedia Britannica says: At age 9 [1883] Cather moved with her family from Virginia to frontier Nebraska, where from age 10 she lived in the village of Red Cloud. There she grew up among the immigrants from Europe—Swedes, Bohemians, Russians, and Germans—who were breaking the land on the Great Plains.

Cather in the guise of Jim Burden writes: I was ten years old then; I had lost both my father and mother within a year, and my Virginia relatives were sending me out to my grandparents, who lived in [Black Hawk] Nebraska.

Jim travels in the care of farm worker Jake, and on the train with them is a family of Bohemians who get off at the same stop, and who as it happens are taking up the property next door to Jim’s grandfather’s.

ON SUNDAY MORNING Otto Fuchs [the other farm worker] was to drive us over to make the acquaintance of our new Bohemian neighbours. We were taking them some provisions, as they had come to live on a wild place where there was no garden or chicken-house, and very little broken land.

And so Jim meets Ántonia, a few years his elder, and they become firm friends running free across the prairie whenever there is no work. The Shimerdas live in what is little more than a hole in the ground. The father a furrier and musician back home, has no aptitude for farm work, which is increasingly left to Ántonia’s older brother, Ambrosch.

Antonia had opinions about everything, and she was soon able to make them known. Almost every day she came running across the prairie to have her reading lesson with me… [and] to help grandmother in the kitchen and to learn about cooking and housekeeping.

Jim himself does very little farm work, just the chooks and the milking, consistent with him just being Cather in pants.

Cather’s descriptions of the plains and its people are what has made these books live for so long, but the first two and especially The Song of The Lark have a dramatic intensity that My Ántonia lacks altogether. It simply drifts along, first I did this, then I did that.

Though, for the first year and especially that brutal first winter, it’s nearly all we did this, we did that as the Burdens help the Shimerdas survive. Jim starts school, then as Cather’s family did, the Burdens move into town. Mr Shimerda has died, and there is more physical and emotional distance between the friends, especially as Ántonia, Tony now, takes on more outside work both for her brother and for their neighbours.

Since winter I had seen very little of Antonia. She was out in the fields from sunup until sundown. If I rode over to see her where she was ploughing, she stopped at the end of a row to chat for a moment, then gripped her plough-handles, clucked to her team, and waded on down the furrow, making me feel that she was now grown up and had no time for me.

There is very little discussion of the fact that Ántonia at 15 or 16 must have had very different interests to 11, 12 year old Jim. He – who remains a bachelor throughout, as Cather herself stayed unmarried – is clearly romantically interested in her but not so much she in him. In fact the relationship is only believable if you turn Jim back to what he really was, an infatuated schoolgirl.

In town the Burdens’ next door neighbours, the Harlings, a big prosperous family, come into the story and eventually Ántonia comes to work for them as housekeeper, leading the story in a new direction, the doings of Ántonia and her friends, collectively ‘the Hired Girls’, young migrant women not too proud to work in service to support the farms of their families. Those girls, Tony, Lena, Tiny, the Marys are free to go out in the evenings, to listen to music and dance, and Jim is often out his bedroom window to join them.

Life goes on, all the interest is in the detail and the descriptions. Jim goes to College in Lincoln, as did Cather. Lena comes to town as a dressmaker and the two often go to the theatre together. One performance is of a Dumas play related to La Traviata. This is of course La Dame aux Camélias (Camille in American)

The actress who played Marguerite was even then old-fashioned, though historic. She had been a member of Daly’s famous New York company, and afterward a ‘star’

Research points to this having been not Sarah Bernhardt, my first guess, but her predecessor Clara Morris.

We hear Ántonia has gone off to marry her sweetheart, a railway man, but she is soon back, pregnant, hidden away on the farm. We finally catch up with her 20 years later, happy, married to a fellow countryman, a farmer’s wife with a dozen children.

Read it, the descriptions are wonderful. If I describe it as America’s A Fortunate Life, then Australians at least will know what I mean.

Liz, Adventures in reading, running and working from home,
My Ántonia Readalong (here)
O Pioneers! (here)
The Song of the Lark (here)

20 thoughts on “My Ántonia, Willa Cather”