Skip to content
HomeParable of the Sower, Octavia Butler 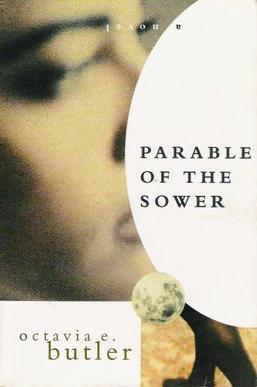 Parable of the Sower (1988) is deeply American SF, all guns and God. Well SF when it was written anyway, 3 decades ago, but now just another story of the US’s decline into hell in a handbasket. Trump, and McConnell’s GOP, too busy harvesting the spoils thrown up by the collapse of the once, recently great empire to offer leadership.

Octavia Butler (1947-2006), a Black American woman, is one of the greats of science fiction writing, deeply thoughtful about race, gender, and class, though not as prolific as many of her contemporaries.

In Parable of the Sower she posits the rise of a new religion, with the slogan “God is change”, and a young black female messiah, against the background of climate induced chaos as America falls back into the unregulated capitalism of mass unemployment, zero social services, corrupt police, and indentured slavery, not to mention roving packs of drug crazed pyromaniacs and walled, armed enclaves in the suburbs.

And I say ‘background’ because though economic and social collapse is central to the story there is not the clear economic analysis of the book’s forbears, Steinbeck’s The Grapes of Wrath, Jack London’ s The Iron Heel and Upton Sinclair’s The Jungle. Instead, Butler focuses on what a new religion might look like, what sort of God would make sense of the ever-present danger and disorder of ordinary people’s lives.

I don’t suppose only Americans substitute religion for logical economic analysis, though it feels like it sometimes, and the best of them, as here, make their way back to anarcho-syndicalism – that is, self government and equal opportunity – with some sort of synthesis of the teachings of Jesus and Buddha and a non-interfering God which seems to offer them comfort without causing us much harm.

Lauren, 13 when she starts telling her story, has already begun discovering not inventing the religion she calls Earthseed with a God it is up to us to shape. She, her college teacher parents and younger brothers live with four or five other families in a walled enclave in the suburbs on the outskirts of Los Angeles. Throughout the city and by implication, throughout the country, any unprotected building is occupied and ransacked by the masses of unemployed. Gasoline fuelled vehicles are a thing of the past, the internet is mostly down, schools are closed as it becomes too dangerous to leave the enclave, water is scarce and dirty, food is expensive and must be supplemented by home gardens and orchards. Police, fire brigades, ambulances must be paid to attend, are always late and often turn on the people who called them.

With no chance of a college education or employment, Lauren, already sexually active, faces a future of early marriage, constant child-bearing, crowded accommodation and grinding poverty. The father, a Baptist minister, trains the children of his community to shoot and organizes sentries but it is all for nought. By the time Lauren is 18 one brother has joined the gangs and been killed, the father has disappeared, and the enclave is overrun, ransacked, women and children raped, her mother and remaining brothers murdered.

She escapes with Harry (white), a childhood friend and Zahra (black), a wife sold into polygamous marriage by her prostitute mother. And so they join the long trek north, up the west coast to Canada, with tens of thousands of others, preyed on and preying on each other, slowly accumulating a few companions they can trust, children and parents with children.

The danger, shootings and deaths are a given in this brand of dystopian SF, but well done anyway. And the characters and relationships of the protagonists are filled out in a way not generally managed by the writers of boy-SF derived from war and wild west pulp fiction.

Among the people who accumulate in her train is an older black man, Bankole, to whom Lauren, though travelling as a boy, is attracted. They slowly become lovers and he, though sceptical of the religion Lauren is weaving around her little band, offers to lead them to 300 acres of remote farmland he owns in the mountains above San Francisco.

There they find the farm buildings all burnt and the bones of Bankole’s sister and her children in the ashes. And there with seemingly reliable ground water and arable land, remote from the worst of the marauders, they decide to stay. But that, as is always the case with SF, is another story, Parable of the Talents.

Perhaps to make her story more ess-eff-y, Butler gives Lauren and a couple of the lesser characters the ‘talent’, handicap really, of being able to feel the pain of others, so that if Lauren shoots someone she must die, or feel like she is dying, with them. But what is much more interesting is the feeling which people have, at least while they still have jobs and houses, until quite late in the story that this failure of the state is temporary, that after the next election or the one after, life will return to normal.

You get this feeling from America today. That the GOP, captured by the billionaires’ Tea Party, will be stopped from wrecking civilised governance, that the engineered failures of health, education and social security systems, the headlong rush to climate catastrophe, the hollowing out of the middle classes will all be reversed by a Blue Wave in November, when the opposite is clearly true. The Democrats are as captured by Big Money as the GOP; the South is already lost; the American dream is headed for nightmare as SF writers have been fortelling for decades.

*Origin “Going to hell in a handbasket”
The phrase originated in the USA in the mid 19th century and the first print record is in I. Winslow Ayer’s account of events of the American Civil War “The Great North-Western Conspiracy”, 1865  (theidioms.com)

The suggested origin I liked best was being lowered down a gold mine shaft in a basket, which would have been quite common during the gold rushes from the 1840s on.

19 thoughts on “Parable of the Sower, Octavia Butler”