Work fell in a hole in June and I’ve been waiting weeks between trips. Getting stuff done? Not as much as I’d wish. Even in Perth I put off making appointments in case a job comes up. It doesn’t, or not very often. Sam – or more likely Dragan, who’s been sent on extended stress leave to Serbia, again – stuffed up a contract worth 10 loads a week which means they don’t have enough for themselves let alone me.

There’s a marketplace, like ebay for trucks, where casual (ie. one-off) loads are offered. I price all the ones that suit me. A few weeks ago I won a wide load to Southern Cross (about 400 km east of Perth); over the course of two or three weeks I was offered a couple of others but not at the right money; then last Thursday week I won a truck to go back to Melbourne. In Melbourne I was lucky enough to score a load straight back home. So here I am, Milly making tea and me reading The Magic Pudding to GK’s 8 & 10.

I came out of Melbourne early Wednesday, straight up the Calder, tooted as I went past MST’s country estate, ditto for B3 outside Bendigo, and pulled up at Sea Lake, mum’s old home town, to top up supplies and look around for the first time in more than 50 years. As farms got bigger and farmers got older, ie. past child bearing, country towns shrunk alarmingly and it looked for a while in the 1980s as if Sea Lake might become derelict, but they seem now to have stabilised and even to have polished some of the rough edges. There was a story in the paper (the Age I suppose) recently that Chinese tourists are coming in large numbers to photograph Lake Tyrell, the huge salt pan to the north, so that might be part of the reason, and Australians driving round to see the painted silos must be part of it too.

The last time I can remember coming to the shops here, Granddad, Dad and I had brought a load of sheep into the saleyards and then gone into town, to get stuff for Grandma no doubt. Dad bought me an ice cream but wouldn’t let me eat the cone all the way to the bottom because my “hands were sheepy”.

You can imagine I was overjoyed, this time, to discover a community art gallery and second hand bookshop opposite the supermarket, and at $2 per book I decimated their classics. Below are a couple of brilliant Lake Tyrell photos from the gallery (with the permission of the volunteers) by Robert Poynton and Ron Hawkins respectively. The prints are around $300 ea. 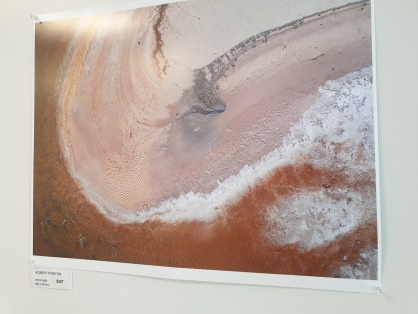 After a decade of audiobooks, something new (to me). Three of the books above go on into the first part of new books, two of them without warning, which presumably I am then meant to rush out and buy. Disconcerting and annoying!