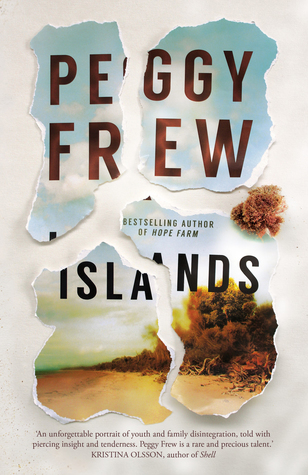 My purchase and review of Peggy Frew’s recently released Islands are to make up for my blowing off a review of Frew’s “best selling” Hope Farm (2015) (here). I don’t regret it. Frew seems to me an innovative and interesting writer, and a writer who writes out of places and personal situations that she knows – which you know I prefer. The “Islands” of the title refer in the first place to Phillip Island, a semi rural family holiday spot at the mouth of Westernport Bay, an hour or two east of Melbourne. I guess the title also alludes to the separateness of the protagonists, but that sort of thing generally eludes me.

The Age/SMH review I’ve linked to below (if you can access it) seems to refer to Frew’s connections to Phillip Island and to the history of the ms in relation to both her childhood and to her other writing. I didn’t read it all. But going by Hope Farm and Islands, Frew does seem to be working through a problem with distant mothering – a mother, not necessarily her own I hasten to add, who takes frequent, inappropriate lovers, the protagonist/daughter excluded, more or less abandoned.

Islands‘ principle protagonist is Junie Worth but at the core of the novel is the disappearance of Junie’s younger sister Anna when she, Anna is 15. Frew works hard to vary both the points of view and the nature of the excerpts that gradually build up into pictures of first Junie, mostly as she sees herself, and then Anna as others saw her.

In my opinion, the story-telling works best when Frew is closest to her subject matter, ie the details of Junie’s childhood, adolesence and marriage and least well when Frew is more ambitious, for instance when she reports as monologue John Worth’s – the girls’ father’s – therapy.

It’s been three years. There was a police investigation. And they found nothing, they were fucking useless, pardon me. And they just seemed to give up really fast. They were saying things like, If someone doesn’t want to be found there’s not a lot we can do. This is a child we’re talking about!

She was fifteen. I said that; didn’t you scribble it down in your secret little notes?

Okay, maybe I didn’t say it. Sorry. Sorry about that. I just get fired up when I think about the cops. Phew, okay, sorry.

When Junie’s in year 12 she lives permanently with her father, to do her matric without distractions. Anna dislikes her father, his agonizing over the failed marriage, stays with Helen. We – the reader – know from the beginning that Anna is/goes missing.

You were a girl, thin and young, with veins that showed blue through your pale, pale skin and you hair was reddish-gold and really you were still a kid when we saw you last [opening lines].

The back cover blurb gives away this and more. I resent/resist reading blurbs, all blurbs, but especially those like this one that in summarizing the story release all the early ‘secrets’.

The excerpts, mostly dated, swirl around as the author gradually builds a picture of life for these people – from John’s childhood through to Junie’s children –  on this island, and in their home suburb. An effect which is spoiled to some extent by giving us Helen’s childhood in one big chunk late in the book.

Even as Helen is looking up langorously from the latest lover to wonder lazily where Anna might be; as Junie goes from uni to marriage to motherhood; as John searches dementedly city streets and railway stations; we begin to see more of Anna as teenage schoolgirl. Short skirts, cigarettes, dope, bare scarred legs, missed classes, late nights. Acting out. See her through the eyes of classmates, more distantly through Junie.

Junie can look back on the past, when Anna was there. She can see, behind her, that world, where things were aligned. And then there is a signpost, a marker, which is Anna being gone. And after that the void opens… you wake each day in the world of No Anna.

There are resolutions. In an unfortunate final chapter Frew suggests an ending for Anna, which might have been better left up in the air. I admire Frew, for the risks she has taken in telling the story this way, and yet I believe that if she were to focus on one protagonist – herself of course – and her relationship with her mother, however fictionalised, and were just to write and write her way through that, with the most limited externalities, then she would better achieve her potential as a writer of character-based literary fiction.

But perhaps I’m wrong.  Maybe the mother-daughter stuff’s all done with now and the next book is about something else altogether. We’ll see. You might not think so, but I do understand that novels need ‘stories’ to be saleable, I just, mostly, find stories uninteresting. Meanwhile, read it for yourself. I enjoyed it, and despite the reservations some of you expressed about Hope Farm, I think you will too. 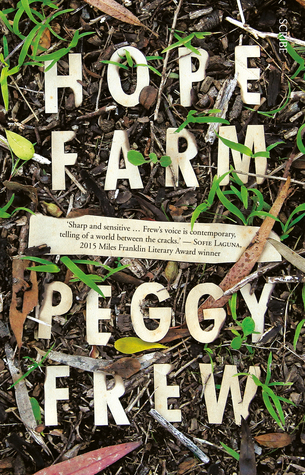 Hope Farm (2015), shortlisted for the 2016 Stella, is one of those worthy books that travel around with me but which for some reason I resist reading. Luckily, last Tuesday, its time came. I finished the Total Devotion Machine review, reached into my bag for the next cab off the rank, hesitated over Junkie – 3 SF/experimental in a row?; Lily Brett – but so soon after New York?; and so spent the rest of the day, not unhappily at all, with Peggy Frew.

What had put me off of course was the name, I’m rarely in the mood for a rural idyll. Hope Farm is the name of a run down farm rented by hippies in – I’m guessing – Gippsland, the Strezlecki Ranges east of Melbourne. Thirteen year old Silver and her mother Ishtar are taken there by Miller, one of an endless succession of men briefly put on a pedestal by Ishtar (the better to see their feet of clay?).

That was last Wednesday week. And there I ran out of time.

I remember a bit more, Ishtar an intelligent woman with a reading difficulty, her story childishly written, running alongside Silver’s as we gradually learn how both women got to be where they are now. Life for the orphan Silver a series of insecure dependencies from foster home to Ashram to hippiedom and rural, communal living. Reminiscent of Helen Garner of course, but Garner who is quite clear on the rules and difficulties of urban share houses, never quite says how she got there in the first place.

Fascinating for me, as these people and more particularly their theories were very much in the air when I was in my twenties. I chose a different path, shared housing a convenience rather than a way of life, but at different times at least considered going bush and scratching out a living.

“And there I ran out of time”. I was a few days in Melbourne because Dragan, back from two months furlough, had found me some loading ex-Perth where Sam had none, but had then found ways to divert me all round Victoria and southern NSW while he rushed his own trucks in from Adelaide and Sydney to grab the available freight and leave me stranded.

Still, I had a pleasant weekend with Mum, got some reading and writing done. Got a promise of a load home from another carrier and by late Wednesday was on my way. Missed sweet (?) sixteen’s birthday. Parked up Saturday arvo. Friends, the Longvales, old family friends from the very first days our kids were at kindy together and on through primary school, high school, functional and dysfunctional teenagerhoods, weddings, divorces. Friends who one particularly messy year had taken Lou in when Milly and I couldn’t, had my flat for a few weeks, and so I stayed with Milly. Not long enough to wear out my welcome.

On Sunday we had a family dinner at Clancy’s in Freo, where the kids have plenty of space to play. Kimbofo should have come, she lives just across the road, but sadly was unwell. Tuesday we had dinner with the Longvales. Otherwise it was a quiet few days of cryptics, quiches, left over birthday cake, wine, more cake, and good vego cooking.

A mate with a few acres in outer suburbia had earlier offered me parking for my truck and trailers; Dragan looked away when I dropped in with paperwork; his sister requested my fuel card. Without words an era in my working life came to an end.

On Tuesday I secured a part load to Mackay, north Qld; thought I had another, high paying load to Kununurra in the far north of WA which would have involved a trip around the top; there were difficulties with it being oversize; it fell through, was revived; fell through again. And meanwhile between socialising and not being able to settle down, I was neither writing nor reading much. Not much except American politics as their “president” begins spiralling towards an early exit and almost certain jail.

A Toowoomba-based carrier I had been chasing for ages came good with a load for my back trailer; the Kununurra load came up again and I regretfully knocked it back; and today, Sunday I’m in Port Augusta on my way to Mackay and Townsville, diagonally across the continent, for the first time in eighteen years. Ok, my seven hours break is up, I’d better fire up and get moving. (map)

Up and over Horricks Pass, too narrow and winding for B Doubles but legal and an hour quicker than the alternative, through the Flinders Ranges, through Peterborough, old railway junction town of lovely stone cottages and shop fronts and out onto the endless desert plains of red dirt, saltbush and acacia.

I’ve stopped again at Broken Hill, to get this off, will sleep somewhere short of Cunnumulla tonight and around Clermont tomorrow. Who knows what my next review will be. Not Lorna Doone whose words fill today and all of tomorrow probably, the damp green fields of Devon a strange contrast to the Australian outback. But something will come up, it always does and I have to have a day off before the end of the week.