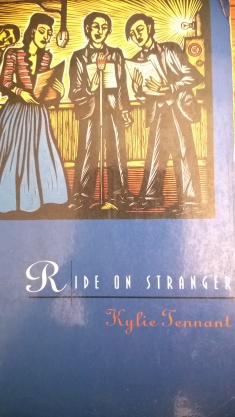 Kylie Tennant (1912-1988) was, like Katherine Sussanah Prichard, an early member of the Communist Party of Australia, although not for long, and was soon at loggerheads with them over her depiction of the communist apparatchik Charteris in Ride on Stranger. Nevertheless, she remained committed to the depiction of the plight of working people in general and working women in particular in the years of and following the Great Depression, and is the first of a number of women writers to touch on the terrible toll illegal backyard abortions took on poor women unable to afford a doctor.

Tennant was brought up in Sydney and attended Brighton College, Manly. She went on to commence a BA at the University of Sydney, but with little support from her family and unable to afford the fees she dropped out after first year. She wrote 10 novels, of which Ride on Stranger (1943) is the fifth, plus plays, children’s works and non-fiction.

Ride on Stranger has a cast of independent women, Shannon, Beryl, Lucy Rossingale, Aunt Edith, all childless, mostly unmarried, and all, except sometimes for Shannon, financially self-supporting. Shannon’s mother sets the scene:

“Look at what a good life men have. It doesn’t matter whether they’re married or single, they never have to worry, and a woman’s life is just one long worry. If she isn’t stricken down every month, she’s worrying because she’s not. She worries about having children, and she worries about not having any.”

Shannon, her fourth daughter, proves to be yet one more worry and when she is out of school she is bundled off to Aunt Edith who runs a boarding house in a nearby town (in Western Victoria) with the assistance of her housemaid, the ambitious Beryl. Soon Aunt Edith gains a husband, the snake-oil salesman Vincent Sladder, and the household moves to Sydney, and Shannon and Beryl move into the orbit of the lovely, soft, divorcee Lucy Rossingale

Every one knows when she is out-classed, and Beryl, for agility of mind or lure of body, was to Mrs Rossingale as a child’s pop-gun to the latest thing in ordnance. Her first jealousy passed into avid curiosity. You could learn, Beryl decided, just by watching Mrs Rossingale.

Sladder turns out to be, amongst other things, an abortionist:

He sighed. “It would be quite all right too if it wasn’t for the ten percent who die on you … you find these cases. Either half starved or something wrong somewhere, and they deliberately deceive you by looking healthy. Why a colleague of mine had a woman die on him in exactly nine minutes, and he got five years. Five years for trying to do a kindness, and not even the sense to get his fee in advance.”

Shannon moves through a series of jobs, growing during the course of them from a fresh faced country girl to a hard working, efficient organizer. Through friend and workmate Olly she is introduced to the Party where she is rewarded for her efficiency by being given more and more, mostly unpaid, work. When the unmarried Olly becomes pregnant, she tells Shannon: “I think I can fix it for five pounds” (the price for a real doctor to perform the illegal operation) but Shannon is unable to borrow such a large amount until it is too late and Olly has a fever, from infection, following a backyard abortion. They take her to hospital but she dies. As Shannon walks home ‘the street seemed to fade out into an endless ward of dying women about whom nothing was said, no statistics offered, no voices raised. They just died, evilly and painfully’.

The women, Shannon, Beryl and to a lesser extent, Lucy take separate paths to independence. Lucy, not such an important character except as a foil to the others, plots and schemes to be in a position where she does less of the work and obtains more of the credit; Beryl is no better than she should be, dresses smartly and works her way up, through sales, to proprietress of a shirt factory; Shannon works hard, often idealistically, and she has her admirers. Even so, until she is briefly married towards the end of the novel, she maintains, as the working class Olly points out, her middle class prudery. But at the end, her husband dead in the war: ‘Without a roof over her, or food, or money, Shannon would stay herself, as independent as a song.’