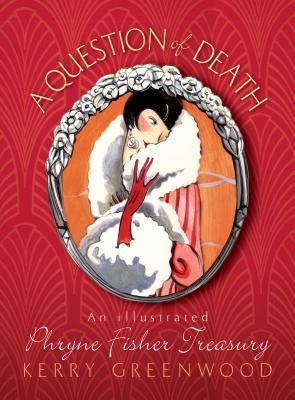 Three decades ago Kerry Greenwood modelled Phryne Fisher – now well-known with her own ABC tv series – on my own favourite fictional hero Simon Templar, the Saint, because “I wanted her to be a female wish-fulfilment figure”.

From all the Phryne Fisher detective stories I have listened to I can tell you that Phryne was an artists’ model in Paris and subsequently an ambulance driver in the Great War; that she grew up in poverty in the Melbourne working class suburb, Richmond until her father unexpectedly inherited an earldom and a fortune; that over time she accumulates a household – in her fine home near St Kilda beach – of a lady’s companion rescued from an orphanage, two highly intelligent adopted daughters whom she sends to school, an older couple who fill the roles of housekeeper/cook/driver/handyman, and a lover from the Little Bourke St Chinese community (or perhaps she’s his concubine); and she drives a red Hispano-Suiza (the Saint drives a Bugatti).

Greenwood set her mysteries “in the 1920s – in 1928 in fact, because I had written a legal history essay on the 1928 wharf strike, my father being a wharf labourer”, and claims that Phryne is “a bold creature for the 1920s but not an impossible one. None of the things she does are out of the question for that brittle, revolutionary period.” I would say rather that Phryne is a modern woman – an Independent Woman as I have defined her previously – set in the (very well researched) past deliberately to illuminate the feminist possibilities.

I have been quoting from Kerry Greenwood On Phryne Fisher, which is the first chapter of A Question of Death (2007). The remainder of the book, printed on glossy paper with illustrations by Beth Norling, consists of thirteen short mysteries, interspersed with recipes and a glossary of 1920s Australian slang.

We blogger/reviewers remark from time to time that the short stories in an anthology are not dated and that makes it harder to evaluate the author’s progress as a writer, and that is the case here. Though I’m guessing they’re printed in the order they were written.

The first Phryne Fisher novel, Cocaine Blues (1989), describes how Phryne gives up high society life in London, sails to Melbourne, takes a suite at the Windsor, employs Dot, her maid/companion and begins solving crimes with the aid, of course, of wharfies, communists and returned soldiers, Bert and Cec.

The first story in this collection, Hotel Splendide, is set maybe a year or so earlier. Phryne is on holidays in Paris with a handsome, young single man when she hears the voice of an Australian woman in distress. “She had no reason to remember Australia with any favour. But the voice brought back hot sun, eucalyptus leaves, ice cream made of real cream.” The woman believes the hotel has stolen her husband. Phryne takes control and in a few hours the husband is discovered. The writing is a bit uncertain, a bit twee maybe and I wondered if these stories might by easier to listen to than to read. But the subsequent stories soon settle down to race along with the familiar mix of sex, fashion, humour and mystery.

Mix one part absinthe with one part lemon juice. Shake over ice.

By the second story Phryne is established in Melbourne and is holding a party. None of her retainers is mentioned but Inspector Jack Robinson is. He’s her Claude Eustace Teal if you know your Saint, though more likely to ask Phryne’s help than to regard her as a rival (or uncaptured villain). There’s a preacher – “a nasty wicked hymn-singing hypocrite” – the improbable murder of two brothers, and the handsome, blonde, not very bright Lindsay gets to stay the night.

Soon we are in more familiar territory with Dot at Phryne’s beck and call and Mr and Mrs Butler respectively making cocktails and cooking. The two girls and the Chinese lover don’t make an appearance in this series, though Bert and Cec do in a later story. The interior of Phryne’s house is sketched in but it is not given a location.

‘Now listen,’ Phryne planted herself on his knees to keep the young man still and took a fistful of the soft, light hair. ‘You listen to me, Lindsay. I am what I am and I behave as I wish and I will not be dictated to by anyone. If I want lovers, I take them. If I do not want to be married, I will not be married and there’s nothing you can do to make me! Do you hear?’

More mysteries are solved, quickly and without fuss. Archbishop Mannix asks Phryne to find Collingwood coach, Jock McHale’s hat (I realise that is a sentence incomprehensible to non-Melburnians). We mix mostly in high society – new rich and old rich. We motor down to Queenscliffe in the Hispano-Suiza.

In Carnival, Phryne’s escort is a bounder. But after a fine time trying out all the sideshows at a fair, Phyrne finds someone else with whom to spend the night, and Greenwood has the genesis of the novel Blood and Circuses.

My favourite story is probably Death shall be Dead, where Inspector Robinson is studying Chaucer at night school, three grinning bodies are found in a burnt out Footscray house and a black labrador named Anubis proves to be both God of the Dead and Guardian of the Hidden Treasure.

Phryne Fisher fans – and Saint fans too, probably – could not help but enjoy this book. It is beautifully presented and as always, lots of fun. And yet still it manages to be political – feminist, lovingly descriptive of working class and underclass life, and satirical of Melbourne society.

18 thoughts on “A Question of Death, Kerry Greenwod”