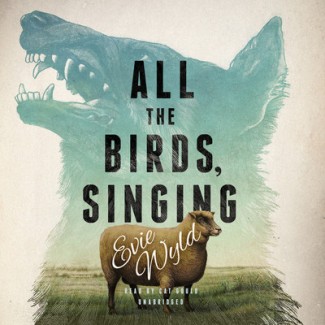 Yet another woman farmer novel! Just a coincidence. Maybe. I listen to lots of indifferent fiction while I’m driving but the cover of this with its “Winner of the 2013 Encore Prize”, and “From one of Granta’s Best Young British Novelists” at least looked promising, even if it gave no hint that it might also be ‘Australian’.

Here are the facts. The audiobook is read by a woman with an Australian accent. The story is of a woman sheep farmer on an island off the coast of England who we gradually come to learn has escaped a traumatic past in Western Australia. She is a strong, tall woman with terrible scars on her back. Some of the WA bits are clearly researched rather than lived. Evie Wyld was born in and lives in England, and this is her second novel.

I listened on the way home from Sydney over the weekend and on my first day off thought I would do some googling. Evie Wyld was born in 1980 in London. Her mother was/is Australian and the family spent some time on Evie’s grandparents’ property on the NSW north coast. And …

All the Birds, Singing was the winner of the 2014 Miles Franklin. Who knew!

The shortlist for that year included, Richard Flanagan’s The Narrow Road to the Deep North, Tim Winton’s Eyrie and Alexis Wright’s The Swan Book – which may well be the book of the century let alone the year, what were the judges thinking! (My reviews here, here, here). Still, Wyld’s is a strong novel and a refreshing take on the Independent Woman, most reminiscent probably of Nikki Gemmell’s Alice Springs.

The story begins with Jake Whyte – an Australian woman – discovering a gutted sheep on her little farm on an isolated English island. For a long time she suspects the local kids but there is a ‘shape’ that moves in and out of the woods. The novel alternates backwards and forwards between England and Jake’s past in Western Australia. In the West she is a rouseabout in a shearing team out from Kambalda. I don’t think Wyld has ever seen shearing or been to the West, but if you haven’t either then you won’t notice. I can’t help myself saying though that Kambalda is a very ‘suburban’ mining town, built in the 1960s and doesn’t have any tin shed pubs.

Just as we are getting to know the shearers, the Australian chapters start moving backwards in time, first by hints, then by descriptions of her earlier life, held as a sex slave maybe by an old man on a remote property between Port Hedland and Marble Bar. And yes, that’s tropical cattle country, not sheep country. The boundary between cattle and sheep was always south of the Tropic of Capricorn and with the decline in the wool industry and the depredations of wild dogs has moved maybe 400 kms further south in the 20 years I’ve been back in the West. But anyway, the old man teaches her a bit about sheep farming which she uses to get her rouseabout job.

It’s too hot, but I like the way my arms feel like they’re full of warm oil, and sweat runs down them in sheets soaking the sides of my singlet. There’s an ache in the bottom of my spine from bending and lifting, but it beats lying on my bed at Otto’s waiting for the day to be over. I catch myself smiling as I throw another fleece onto the table and Denis nods to me, impressed.

It would unwind the narrative tension to say more about the situation she gets herself into with the old man, Otto, but it’s well done.

We go back further. School days in country Wyld has lived in, the NSW north coast. An Aboriginal boyfriend. A bushfire.

Back in the ‘present’, we meet the man she bought the farm off, who has retired nearby but helps her out from time to time, or provides commentary if she’s not in immediate danger; his delinquent son and the son’s girlfriend; and a well-spoken alcoholic she discovers sleeping in the barn and who never quite gets round to leaving. The ‘shadow’ keeps taking sheep. And throughout, the birds sing out or cry warnings. (Evie, there are no kookaburras in Western Australia).

A good book, very good even, but not in the same league as The Swan Book.

Sue, Whispering Gum’s review (here), but she seems also to have mentioned Wyld quite often in the context of awards and women’s writing. If you put Wyld in her search box it brings up ten or so listings. Check them out.

Lisa ANZLL has reviewed Wyld’s earlier After the Fire, A Still Small Voice (here) but All the Birds, Singing must still be on the MF TBR.

15 thoughts on “All the Birds, Singing, Evie Wyld”