First published as by Brent of Bin Bin, 1928 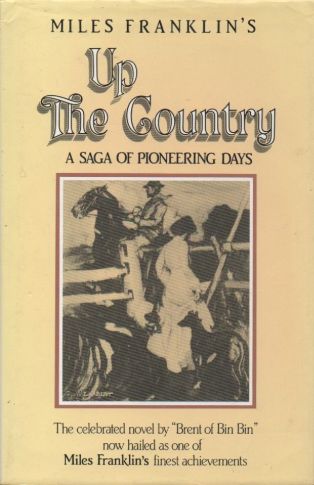 Up The Country is the opening novel of the family saga Miles Franklin wrote under the pseudonym Brent of Bin Bin. It’s set in the country she regarded as ‘home’, the high country of NSW’s alpine south, and specifically around her birth-place Talbingo, which in these novels she gives the name ‘Bool Bool’*, on the western slopes of the Great Divide and the Monaro (‘Maneroo’)high plains on the eastern slopes.

My 1984 Angus & Robertson edition begins with a Publisher’s Note which says that in 1951 when A&R took up the rights, editor Beatrice Davis worked from “a copy of the [1928] Blackwood edition, to which Miles had made numerous changes… No attempt was made to subdue the floridity and syntactical eccentricity that are the hallmarks of Miles Franklin at her worst.” However, A&R discovered an older ms dating from 1927 “which told the story in simpler, fresher, more direct language”. The present edition, based on this rediscovered ms, “has been edited more severely than Miles Franklin herself would have allowed… We have also taken the liberty of deleting her long, anti-climactic ending.” How I feel about this, I cannot be sure. I’m a fan of Franklin’s unusual, exuberant  writing and I’m worried we may have lost something. Jill Roe notes the re-publication but offers no opinion on the severity or otherwise of any changes.

The story begins in 1852. The heavens have opened and Three Rivers station will soon be isolated by floodwaters. The Mazere family’s Three Rivers homestead is hosting the owners of all the major properties around Bool Bool for the wedding of the lovely Rachel Mazere to Simon Labosseer, who has taken up grazing land on the other side of the mountains where he is the neighbour of ‘Boko’ Pool, a former convict made good. So we are introduced to all the principal familes.

The core of the novel is the tension between the Mazeres and the Pools. Philip Mazere senior is the descendant of French Huguenot aristocracy and doubts Pool’s honesty – bulls and stallions which go missing in the rugged mountains are obviously contributing to the bloodlines of Pool’s herds – so when, a few years prior to 1852, Mazere’s oldest son, also Philip, marries Charlotte Pool, he withholds his blessing. Within a couple of years Philip Mazere junior leaves for the Victorian goldfields and Charlotte, who for years following her mother’s death had been her siblings’ surrogate mother, finds herself  a grass widow with two children and effectively the Mazeres’ housekeeper.

Over the course of the novel ‘Boko’ Pool gets a governess for his children, a lady who has left England to escape disgrace, marries her and, as he rises in gentility, adds an ‘e’ to become James Poole Esq. His son is the novel’s hero:

Bert, Charlotte’s eldest brother, a youth of seventeen and already one of the most resourceful, daring and accomplished bushmen in those parts …

Bert, who had never had a collar and rarely a shoe on him till Charlotte’s wedding, was only a shade less knowledgeable in bush lore than the Aborigines, from whom he had received some tuition.

… and though these and a score of other accomplishments were common to all bushmen worthy of the name, Bert’s prowess was already legendary.

Aborigines are mentioned off and on, including two or three who are friends with Bert. They are employed around the properties when stockmen take off for the goldfields but take little part in the action. Roe refers to “some of the most mountainous terrain in Australia, so rugged it had only ever been lightly touched upon by the indigenous Ngunawal and Ngarigo peoples.” (2008, p.1)  Franklin certainly implies that there were very few indigenous people in the area by 1850 (after about 20 years of settlement) but gives no reason for this, except to say they withdraw to the coast to escape the snow over winter, which a website for the Shire of Monaro says is mistaken (here).

The early part of the novel is concerned with the wedding of Rachel to Labosseer and the coincident floods. Franklin lets rip a few times about the fortyish Mrs Mazere still regularly having babies, but otherwise reins in her feminist impulses. Except that, although Bert is the fulcrum about which the novel turns, the point of view is more often that of the women and the kitchen rather than the men and the great outdoors.

And so the novel proceeds. Bert heroically gets Mrs Mazere across a swollen river to rescue a woman in labour. The groom and the vicar finally arrive to conduct the wedding. Bert in his innocence and to Labosseer’s great annoyance hovers around Rachel at every opportunity. Rachel’s younger sister Emily blooms into womanhood but, like every other young woman, cannot attract the attentions of Bert who seems determined on bachelorhood. All the other young men in their little community swarm around Emily. Charlotte leaves to live on the diggings with her husband. Bushrangers move in and hold up all the homesteads. Suspicion falls on Bert, who attempts to catch the robbers single handed and ends up shot. The novel ends with a great tragedy which rings down through all the subsequent novels of the series.

Up The Country succeeds as history because Franklin has a great knowledge of and love for the high country and its pioneers and is able to describe in detail the homesteads, the day to day operations of farming and cattle grazing, and the precarious nature of communications and transport between and within the colonies. It succeeds as story telling because Franklin makes Bert and Charlotte and Emily, in particular, live. She makes us care about them, and she surrounds them with big, loving families whose members drop in and out of the stories as needed.

Some quotes. A woman’s lot –

Mrs Piper’s situation [a difficult childbirth] inclined Mrs Mazere to reflect that, had God given birth to His Son Himself instead of imposing the task upon a woman, it might have resulted in fundamental reforms

On these expeditions he rode a small yellow bay with a dash of Timor, hardy and sure-footed as a goat. She knew the country as well as Bert did, and though seemingly dwarfed by her rider, she carried him up hills so steep that no amateur could have remained seated on her, nor any girths but those of sheer greenhide have stood the strain. Then down again, by a series of props.

The drays carrying winter supplies for Three Rivers reached the Yarrabongo punt the evening before [Charlotte’s] departure. The camp fires of the teamsters gleamed in the bend of the river on the flats, and the bullock bells combined with the orchestra of frogs and crickets with which the earth seemed to pulsate.

On reaching the homestead, the teamsters began to unload early next morning. The arrival of winter supplies was always a time of bustle for the household. Delightful it was to stow away the cases of currants and raisins, and the bags of white sugar and rice in the big ant- and mice-proof bins in the store room.

These days old Talbingo is under the waters of the Snowy Mountains Hydro-electric Scheme. I can remember sightseeing at nearby Adiminiby already abandoned but not yet flooded, in 1956. So when Miles made her visit to her Lampe grandmother’s property, still in the family, a few years earlier, hopefully it was then as it was in her memories and in this book.

For other Miles Franklin posts and reviews go to:

*Roe implies that Bool Bool is the township of Tumut (now a substantial town), 30 or so km northwest of Talbingo. However, she also says that the fictional ‘Three Rivers’ station presumably takes its name from ‘the confluence near Talbingo of Buddong Creek and Jounama Creek with the Tumut River’ (2008, p.294).

16 thoughts on “Up The Country, Miles Franklin”