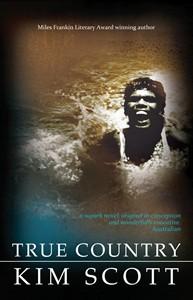 I have been reading Kim Scott backwards, starting with That Deadman Dance (2010) and ending up here at his first, True Country (1993). With Benang (1999) and Kayang and Me (2005) – I haven’t read Lost (2006) – this is a fine body of work. The seven year gap back to Scott’s last work is to be filled later this year apparently with a new novel, Taboo which, according to the author, might be about a community reconnecting to its ancestral heritage, seeking healing.

Now that I have reached the beginning, it is apparent that over the course of his career as a writer Scott has been ‘growing into his skin’. Benang and Kayang and Me were accounts of his journey to document his roots as a Noongar man; and That Deadman Dance was a powerful imagining of a specific and very short time after first contact in WA when the locals, Scott’s Noongar people, held the upper hand. True Country is the story of a young man with some Indigenous heritage, who has been brought up ‘white’, feeling his way as a teacher in an Aboriginal community up north, feeling his way from idealism to a realistic appraisal of the dysfunction of a community in which the old ways are lost and the new ways are not taking, feeling his way towards beginning to internalise his own indigenous-ness.

The quality of Scott’s writing is high, as we now expect – descriptive, poetic, original – and the story is told in a number of voices. First and omniscient is a voice which might be the voice of the community:

You listen to me. We’re gunna make a story, true story. You might find it’s here you belong. A place like this.

And it is a beautiful place, this place, Call it our country, our country all ‘round here. We got river, we got sea. Got creek, rock, hill, waterfall…

Then there is Billy, just arrived to teach the secondary students with wife Liz. Billy’s narration starts out as first person but slides into third person, signifying maybe, his being outside himself, observing, as the community sucks him in. Other voices, Aboriginal, chime in through short chapters and notes.

The novel takes us through one school year, through the seasons of Australia’s tropical north – Wet, Dry, Wet – with little episodes, closely told, reminiscent, in style, of David Ireland’s The Glass Canoe (1976). There is no plot, or not at least until you look back and see what has changed.

The story’s fictional township, Karnama, is on the Kimberley coast of northern Western Australia, and consists of a Catholic mission, a government school and an Aboriginal community. So the whites are priests and nuns, another couple with an 8yo son who are also newly arrived teachers, a handyman, and a manager and a young, single woman employed by the community. Police and doctors might fly in from Derby, but are not part of the story.

Interestingly, Liz as a character is only lightly sketched, we see her pale skin and red hair but rarely hear her voice. Scott’s work is always autobiographical and I wonder if he has/had a wife he didn’t want to offend. Jasmine, the single woman, is a bomb waiting to go off, until she makes her choice late in the year. Gerrard, the manager is venal, profiteering from his position, and the other teacher couple are anxious, fearful, educating their son at home by school of the air, not allowing him to mix with the locals. But none of the whites is really observed in any depth, except Billy. This is his novel and he is most interested in his interactions with his pupils and their families.

But Who’s Tellin’ this Story?

That short teacher bloke, he bit like us, but –he Nyungar or what? Look at him, he could be. Why’s he wanna know things? He get to school proper early anyway, sun-up even …

Dry season: early morning cool, and I left the first footprints in the dew on the lawn.

The switching back and forth of the voices serves to integrate us, the reader, into the community, stops us identifying wholly with Billy.

Fatima, on older woman, tells stories which Billy transcribes from his tape recorder and reads back to his class. This is an oral culture, and even while the children are being criticised for their failure to learn from books, they are able to quote great chunks of the videos they watched the previous night. But Billy loses interest in collecting stories, why?

Gabriella is local girl made good, a uni student down south who comes back periodically to observe. Beatrice, initially bright and helpful, falls apart, is passed from doctor to doctor in Darwin and Perth, maybe she has offended the gods. Deslie, one of the older boys, is cheerful and willing but a petrol sniffer. Francis, held back by poor eyesight and broken glasses, meets a sad end.

The men, Milton, Alphonse, Raphael, Sebastian show Billy around. Billy comes back from Derby with a ute and a tinny, spends his spare time on the river fishing for barramundi. There are not many vehicles and wherever they go there are people piled in the back, tourists too if the bus is broken down.

The children are touchy feely and dismissive of boundaries. Billy and Liz accept this, sometimes of course grudgingly, but often with pleasure:

One hot afternoon Billy, Liz, the high school kids, they all went for a swim …  The group moved in two major clusters, divided according to sex. The girls grouped around Liz and Jasmine, with Jasmine the main focus … They laughed, they shrieked, they studied her earrings and hair. They asked the two women about boyfriends, husbands. ‘Mr Storey [Billy] hit you ever? What he like when he drunk?’ … The girls held their guests’ hands and put their arms around their shoulders…

Imagine, again, seeing all this from above … The kids are mostly tight in around those teachers. Black skin looks good in the sun, shiny. Then nearly at High Diving, the kids break away and start to race to the river. They shed clothes on the run. They dive. They spear the water…

As we progress, the mood gets darker, Billy and Liz feel their openness is being taken advantage of. Karnama is a, theoretically, dry community but the whites drink and are observed drinking. The mail plane brings in alcohol. Builders working on new housing don’t employ locals, live in a men’s camp, drink and are visited by the women. Raphael is a bad drunk, beats his wives. The wives seek refuge with Billy and Liz.

A trip to Broome goes badly. The year draws to an end.

True Country is a stunningly well written book and I hope I have given you some sense of that, but it is also a brave book. Kim Scott, through Billy, confronts his fears and prejudices, the packs of half wild dogs which protect each house, the violence, the lack of purpose and the squalor. And, somehow, at the end he finds himself beginning to belong: “See? Now it is done. Now you know. True Country… We are serious. We are grinning. Welcome to you.”