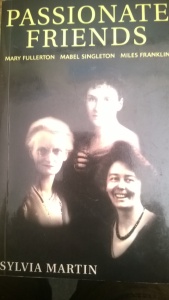 I first read Passionate Friends to support my study of Miles Franklin, but ended up with a wider understanding of first wave feminism, suffragism in Melbourne in the 1900s, and of the evolving nature of women’s friendships. Rather more than I bargained for! The “passionate friends” of the title are writer Mary Fullerton (1868-1946) and businesswoman Mabel Singleton (1877-1965). Miles Franklin was a third in their friendship circle, staying with them in London for a year in 1931,2 and enjoying a voluminous correspondence with Fullerton, in particular, from their first meeting in 1922 and subsequently with Singleton as well.

My ongoing project is to flesh out an understanding of the Independent Woman as an ideal Australian both alongside and instead of the Lone Bushman, and Martin is clear that Franklin and Fullerton saw this as an objective for their writings too. But Dr Martin’s objective is slightly different in that she wishes to position women’s independence and women’s friendships in a spectrum which includes lesbianism. I admit this makes me uncomfortable; as Martin puts it, “Occasionally … biographers show a prurient fascination about single women’s sexuality and its possible “abnormality”; here the offenders are usually male.”

Mary Fullerton was a poet and novelist best remembered now, if at all, for her memoir of childhood in East Gippsland, Bark House Days (1931) although she had a number of novels published and two volumes of poetry (under the nom de plume ‘E’). Miles Franklin wrote in a letter in 1939:

By the way I have just been writing Mary’s name on a list. Alice Henry written to by some body for a list of twenty names of Aust women writers, asked for my list. She had put Mary Fullerton and so did I and so did Kate Baker. She had also Alice Grant Rosman and D Cottrell – I objected to these two and Ethel Turner and M G Bruce – such slush.

Like Franklin, Fullerton was not given any schooling beyond her local primary school, but she was a voracious reader and quite early formed the intention of being a writer. By her early 20’s she was having some success at getting articles and poems published in various newspapers, and publication in Vida Goldstein’s paper Woman’s Sphere (1900-1905) led to her joining Goldstein’s suffragist group, the Women’s Political Association, in 1903.

Mabel Singleton was English, but in 1904 when she was 27, she married a very well-off Australian, Robert Singleton, a 63 year old retired accountant, and returned with him to his mansion, set on extensive grounds, in the Melbourne suburb of Malvern. She soon became active in the women’s movement, and in 1909 while working on Vida Goldstein’s second senate election campaign, she met Mary Fullerton, who expressed her feelings on their meeting in the poem Anniversary (1911):

An intense friendship developed, they were soon both senior office bearers in the WPA, and in 1912 they were noted in the WPA’s newsletter Woman Voter as having departed on “a well-deserved holiday” to England, returning in 1913.

In 1910 Mabel fell pregnant and had a son, Dennis, perhaps not to her husband, as he banished her from Malvern and subsequently disinherited her. Mary’s poems express some shock at this pregnancy, but also love, and the two women and the child effectively form a household from then on, although they did not live together permanently until they moved to England in 1922.

Miles Franklin was taken up by leading Sydney suffragist Rose Scott when My Brilliant Career came out (see my post on My Career Goes Bung) and her second published novel Some Everyday Folk and Dawn (1909) is about the lead-up to women voting for the first time in the Federal election of 1902, but she seems never to have got beyond the fringes of the suffragist movement. In 1904 she was working in Melbourne and was introduced to Goldstein but appears not to have met Fullerton until 1922 when Fullerton came to London to rejoin Mabel and Dennis, and where Franklin had been living for 7 years after spending the years 1906-1915 working with fellow Australian activist Alice Henry in the women’s trade union movement in Chicago.

Fullerton seems to have been greatly concerned by the nature of her own sexuality. She is clear from an early age that she does not want to be in a heterosexual relationship, and after moving up from the country in her early 20s she lives in a household in Melbourne with her mother and sisters, before forming a lasting relationship with Mabel Singleton, which her sisters view with some suspicion. When they move to England Singleton characterises Fullerton to her sisters as a ‘paid companion’, partly to placate them and partly to enable her to give money to Fullerton who is very poor.

Fullerton develops a philosophy around ‘friendship’ based on her reading of Ralph Waldo Emerson and Edward Carpenter, author of The Intermediate Sex (1908), which she sets out in the novella Clare (1923), but the core of her belief system is chastity, as it was for Franklin. In passing, Martin comments, “Unlike her friend who regarded herself to be ‘asexual’, Miles took on a resolutely celibate, but heterosexual, stance.”

Fullerton was a prolific writer, with a constant output of articles and poetry, two non-fiction works about Australian settlers and a number of novels of indifferent quality. Nettie Palmer commented to her husband re A Juno of the Bush (1930), “It makes me ache, to realise that her novel was so bad that the best I could do for it was to say nothing.”

Fullerton’s other great role was to act as agent for Franklin’s alter ego Brent of Bin Bin, under which name Franklin was able to set aside her feminism and produce a 6 novel family saga, beginning with Up the Country (1928) to some financial and (male) critical success while maintaining the secret of her identity as author.

This is an interesting work, based not only on primary sources, Franklin and Fullerton exchanged 800 or so letters, but also on meetings with Dennis Singleton who was I think in his eighties at the time of writing. It has strong underpinnings in feminist theory as you would expect from a work which started out as a doctoral thesis, but remains eminently readable.

Ida Leeson: a life (Allen & Unwin, 2006) about the first female Mitchell Librarian at the Mitchell Library, SLNSW, appointed to great opposition because of her gender in 1932. Definitely an independent woman! (Awarded the Magarey Prize for Biography and also short-listed for the NSW Premier’s Awards and the Kibble Award).

And I am definitely looking forward to Dr Martin’s upcoming biography of Aileen Palmer, poet and political activist and elder daughter of Vance and Nettie Palmer, scheduled for publication in March 2016 by UWAP. (Working title ‘Ink in Her Veins: the troubled life of Aileen Palmer’). Aileen was a committed communist and was interpreter and secretary to the first British medical unit that went to Spain in 1936. She later became an International Brigader, being involved in the Spanish Civil War for two years, then drove ambulances during the Blitz in London during WWII before returning to Australia. (She was also a PLC girl.)